Posted on October 21, 2022 by rantingsfromunder

So for my second submission for “Zom’tober” (I’m not sure this really qualifies for Apocalypse Me, if I’m honest), I decided to paint up all the “Plague” figures that were assembled in the box of Mantic’s “Dead Zone” stuff I’d inherited from my eldest son. As

you can see in the picture 👇🏿 there were seven figures and three dogs. First job was to cover the bases in a few layers of sand and the odd “kitty litter” rock, especially on the “General” figure whose stance (left leg up in the air) was a little odd and also a little fragile looking. So a couple of “rocks” were slotted under his foot then soaked in superglue, this works really well with the cat litter as it soaks it in making them solid as well as securing them in place. Next it was out for a coat of matt black with the rattle can.

Now if I’m honest the original plan was to paint up three of these last week, three this week and the last one and the dogs next week, so having painted up the “General” (Mantic’s official name), the heavy weapon chap and the guy in the hazmat suit first, I sat down to write the first post, but then after thinking it over I thought… this post is going to

be exactly the same as the other two as I’m painting them all basically the same! So rather than bore you with three identical posts I thought I’d crack-on and get the rest done then do one post covering all ten figures. So starting with the flesh I basically followed the same recipe I’d used on the “First Generation” monster I did back in May, Taking plum, ruby red and polish crimson I slapped these about over all the exposed areas of flesh mixing them together as I went to give a “patchy” appearance. Next I gave them a dry-brushing with some bright red to give a more “raw” look to the flesh. I then took some Eurasian flesh and dry-brushed this over the “boney” areas, these were less pronounced and so harder to spot than on the “1st Gen” version, but these were then followed with another slightly lighter dry-brush of coffee. Lastly I added their mouths and eye’s first in black then with teeth and pupils in white, and while I had the “black out” I repainted the guns and various other bits that would be metal and gave these a chainmail dry-brush.

The General, then had his long coat painted in a mix of black and dark grey that was then 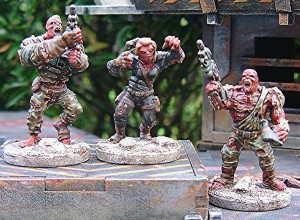 highlighted with more dark grey, his other additions over the others were a bit of copper with bronze highlights on his belt buckle, cap and sword hilt (along with the buckle on the “hazmat” chap and the ammo strip on the heavy machine gun 🙄), along with a touch of ocean blue in his cap badge. His under uniform was painted in camouflage the same as the “Stage 3A” troopers, so taking Khaki first I covered all the uniform areas completely in this, then added splodges of deep bronze green, and then added more splodges of stone green over this. The other odd bits of armour I then painted deep turquoise, and highlighted these in a mix of deep bronze green and stone green (it was supposed to be more deep turquoise rather than deep bronze green, but I got confused! Looks OK though 😉). Any leather bits on show like boots, belts and gloves were my usual chocolate brown with leather highlights. The chap with hair (there was just the one) had it done in ECW buff with sand forming the highlights, and the lenses on anothers binoculars were done in vert green with a dot of lime added to the centres with the “vert” was still wet.

The “Hazmat” suited chap (could just as easily be a spacesuit I guess), had his suit painted 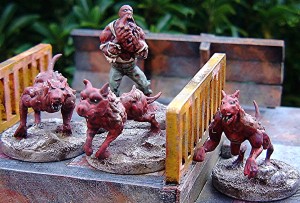 orange and more of the same with a touch of white added formed the highlight colour here. The cat suit wearing lady (Plague Widow? 🕷) I left black and just highlighted her with some dark grey, her hair I just had to do in chestnut and orange (well she had to be a redhead now didn’t she?). The last chap (classed as an actual “Zombie” in the rules) who appears to be ripping his huge mouth open exposing worms or intestines (honestly I have no idea what he’s supposed to be doing! 😳), I simply painted his remnants of shirt in coffee and cream and his trousers were just more of the Deep turquoise, Deep bronze green/stone green combination. That just left the “Hellhounds”, these were painted in the same flesh colours as the more “human” figures the only addition was I added the odd splodge of plum to them before the Quickshade went on.

And that’s what came next, they were all given the same treatment of a coat of the “Strong tone” stuff, and once dry I painted the bases in chocolate brown with subsequent dry-brushes of khaki and coffee, a final spraying with the matt varnish finished them off. So as these were supposed to take the three weeks and only took two that leaves me a free week plus till the end of the month, I think I’ll try and get a couple more Zombies in before the end of Zom’tober, but I think I’ll go more traditional for those 🧟‍♀️🧟‍♂️.

So till next time, unpleasant dreams….Cheers Roger.