Posted on June 8, 2022 by rantingsfromunder

So work is progressing (slowly!) on my entries for “Forgotten Heroes”, and hopefully I’ll have something to show you on these by the weekend. But for now I thought I’d share with you some of my own “Forgotten Heroes”, in other words I’ve been up in the loft rooting about trying to find the toy’s that shared my imaginary adventures from my childhood (as opposed to the 28mm figures that share my adulthood imaginary adventures!! Some things don’t change!!).

Now this idea came about following a conversation with Pat over at “Pat’s 1/72th Military Dioramas”* after he posted some pictures of some of his 1/35th  toy soldiers form his “yoof” over in Australia, and I thought it would be fun for a few of us (who still have anything) to show some of our own collections.

So I thought I’d get the ball rolling, and give you all a general idea of that’s eligible (basically anything, they’re your memories after all). So I’ll start with some of my Action Figures, I’m sure we are all aware of the 4inch revolution that came about after the release of the Kenner “Star Wars” figure line and yes I was a child of that generation, but rather than

just showing you my Star Wars figures, I thought I’d get some of the figures from other ranges that I have, these would all serve their time in my “Space Adventures” very rarely as the actual characters they were supposed to be! I remember that “Mork” often “stood in” for Commander Rann, and the fisher price figure (who’s original name I forget) was often “Time Traveller” in my Micronauts games. (I imagine Darth Vader was Baron Kazar too) Commander Adama, would often be a tough rebel general, and (the now not complete!) Maximillian robot), would be various evil bot’s, as for Spock, I don’t really remember what I did with him (but Kirk and McCoy were in the same box as him. A bit like 28mm figures the great thing about these chaps was they could all be used together as they matched (sort of, but enough for me at that age) scale wise.

These 13.5cm tall plastic WW2 soldiers I seem to think were a

gift from one of my cousins who’d had them originally, there are a few of these (seven or eight) up in the loft, one American GI a couple of Germans, and a few Russian and Japanese infantrymen, these were great for playing in the garden with as you could come back in with a full complement of figures! (Something that almost never happened with my 1/35 and 1/72 soldiers!), they also seem to have survived reasonably intact considering they did their duty serving under two other commanders too! (My two boys).

Now we come to one of my real “prize” possessions, this is my Mego action figure (no dolls here!) of “The Thing”, though I had a few Mego’s, Superman, Spiderman, The Human torch

and the Hulk, this was always my favourite, I remember the advert on the TV showing him for just a second, and my tiny mind being blown away! You could get the Thing! But none of the local toy shops seemed to have him, then one Saturday my Mum and I went to Chester on the bus for the day, and while she was looking at something in “Browns of Chester” department store, I spotted a pile of Mego’s in a box under the staircase, so went over for a root about, and there he was! Just the one, but he was there! I won’t debase myself describing the pleading and badgering that went on for the next couple of hours, but suffice to say, my Mum was happy to buy this prized toy for me (and get me to shut up! 😇).

And so we come to my 1/35th collection, and this is sadly it! After scouring the loft all I could find was this solitary “Desert 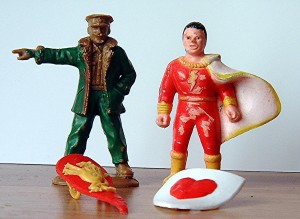 Rats” commander, that at some point someone had started painting green, I think it was me, and it’s probably some paint I found in the garage my Mum had bought to paint our Gomes with! and a couple of shields from my Knights, rather sad to think that this is all that’s left of a couple of “Quality Street” chocolates tins, one full of Soldiers and the other full of Knights and Cowboys.  The other figure I came across was this rendition of “Captain Marvel”, he’s actually a “pencil topper”, but you had to get your heroes where you could back then! I seem to recall I also had Batman and Robin as well but lord knows where they are now!

I know there must be more of my old stuff around somewhere, and if I do come across any of it I’ll try and post it up here before the end of the month. So there you go, I’ve shown you mine now does anyone want to show me theirs?

*And if you haven’t been over there you should, he’s a cracking bloke, and does some wonderful pieces!

28 Responses to “My Forgotten Heroes”