Posted on March 20, 2022 by rantingsfromunder

OK so at the end of last week’s post I promised “A big stompy robot!” though perhaps a “A big “rolly” robot!” might have been nearer the truth, as I have finally painted up my “Wargames Foundry”, Hammerstein miniature that I bought lord alone knows how many years ago, with a view to eventually building up the whole team of “ABC Warriors”, but as it turned out Foundry then released many of the others in a slightly smaller scale, and missed out my favorite member all 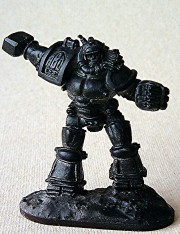 together, so it just never happened and he just languished in a draw. I even added him to my “Random Painting Generator” ((remember that!…No, oh well), but his number never came up. Anyway recently I have been re-inspired to get him done.

Apologies to anyone unfamiliar with the “ABC Warriors” comic strip from the “2000AD” comic, a full description of them and their adventures can be found here…

He was based up on one of my new “pills” shaped cavalry bases, and after I’d filled around the edges with some “Tetrion” filler, he was taken “out back” for a spary coat of matt black. (and yes this is when I remembered to take a “before” picture of him! (doh!) 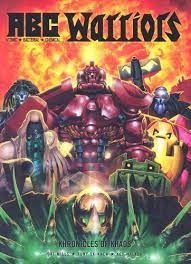 Painting was actually pretty simple, having dug out my “ABC Warriors” graphic novels I decided the colour scheme I’d go for (it does change from story to story, somewhat), was this from ”Khornicles of Khaos”, so after a spray coat of matt black and a dry-brush of chainmail, I mixed some chocolate brown and orange together and taking a small brush that had lost its point stippled this on over all the panels of his body, but leaving the edges and the odd patch here and there with the chainmail showing through, to give him a battered well-worn appearance. I also left the “rolled” edges of the panels in chainmail too (this is not completely accurate to the comic’s but I liked it so why not). His eyes were added next so once painted red they were highlighted first with orange, then a dot of lemon yellow was added. The cables 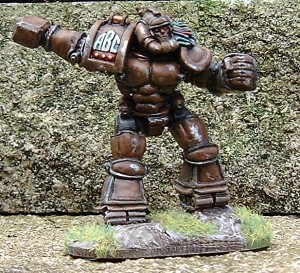 hanging out of the side of his helmet were painted in red, ocean blue, royal blue, shamrock or lemon yellow, and the connectors at their ends were more chainmail. His “ABC” badge was next, the background was first painted cream, then the letters were added in ocean blue, and the red and lemon yellow took care of the “bar & stars” under this. A couple of bits I painted in copper highlighted in bronze and he was pretty much done.

As usual after he was Quickshaded in “Strong tone”, I painted his base chocolate brown, and then dry-brushed khaki and coffee over this. Then areas were picked out in scenic green and then flocked with “Javis, Summer mix” hairy grass.

I do have one other member of the “Warriors”, and I hope to get him painted soon, but I’m off to the movies next time with a namesake of mine…..?

So till then, stay safe, and cheers Roger.

33 Responses to “Spread The Word!”