Posted on January 15, 2022 by rantingsfromunder

OK so I’ve been banging on about this “Advent Challenge” since before Christmas, so I guess I’d better start painting the blooming things up now, I’ve already sorted them out into two a month, with a few of them assigned to months where they are apt for a particular “challenge” (e.g. two female fig’s for “February”, two bearded figs for Mo’vember etc.…), the remaining ones I sorted randomly, though surprisingly they

have often gone into complimentary pairs (as you’ll see as the months go by hopefully), an example of which I have for my first pairing…

Taking “Matt’s” advice on “bones” figures I gave both of them and good scrub with a toothbrush (an old one not my current one!) and some washing up liquid, then both figures were based upon two pence pieces, in Krass’s case forgoing the separate “cobbled” base his feet should have slotted into, then “Tetrion” filler was built up around their feet, before they were both sprayed matt black.

dry-brushed with saddle and then again with Eurasian flesh, the horns and hooks getting yet another subsequent dry-brush with coffee. His eyes were next lemon yellow was used here with normal black dots finishing these off. The face atop his staff was undercoated next in copper, then highlights of bright gold were added over this. The eyes, horns and tongue on this were then re-painted black, before dry-brushing/highlights in chainmail were added here. The couple of teeth visible in his face were then added in yet more coffee, this time with cream highlights and finally I added more highlights to his body and wings in bright red and he was done.

“Krass” (it’s not just me is it, he does look like a “Chaos Knight” right?), was a little more complicated, but not much, inspired by the lovely classic GW “Chaos Knights” Matt over at “PM Painting” turns out on a regular basis, I decided that rather than just dry-brushing him in chainmail, I’d try adding a bit of colour to his armour, so leaving his sword and right gauntlet separate I painted all his armored bits in deep turquoise, but I felt I’d still like a more metallic look to him, so I don’t know if you remember a couple of years back I painted 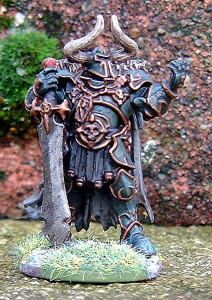 a metallic red dress on my “dame to die for”, by mixing metallic red and silver to form the highlights, so I thought I’d try mixing some stuff up again, this time I mixed some chainmail into some more of the deep turquoise, and as the result looked pretty good I heavily highlighted his amour with this, and I have to say I was pretty pleased with the result (I can see I’ll be doing more of this!). I still wanted some more “bling” on his armour though so taking the copper I added all the edges and “swirly” details in this, then highlighted this with bronze (I thought gold would be a bit too “blingy”), this too worked out pretty well, but as you can imagine left a fair bit of touching up. Now I was going to mix up more of the new “metallic deep turquoise” but I thought as I’d been “enthusiastic” with the highlights of this, I decided I’d try just using the original (non-metallic) Deep turquoise, for this and see how it looked…OK as it turned out, so I left it at that. I dry-brushed his sword blade in chainmail, his horns and fur cape trim were then added in chocolate brown, with saddle and Eurasian flesh highlights, and a final subsequent highlight of coffee added to just the horns. His cape was simply dark grey with mid grey highlights and the jewel atop his swords pommel was bright red with metallic red highlights, and I did do the odd dot of pale pink to try and simulate a reflection here (not sure how good this came out, it’s your fault I tried this Alex!).

Both figures were then given a coat of Quckshade (Strongtone), before being based in my usual way, a spray coat of matt varnish took away the shine and they were done. Well that’s the first two figures from my “Advent Challenge” done, I have to say I really enjoyed painting these, and can’t wait now till the next two. Oh and a quick note, the background in the photo’s is one of the broken ridge tiles that blew off during the high winds we had before Christmas (before you ask yes they have been replaced 😃), I thought it looked quite effective? (suit yourself 😛).

So till next time, stay safe and cheers Roger.