Posted on November 6, 2021 by rantingsfromunder

So we come to the last “challenge” month of the year (well for me anyway), “Mo’vember” though I’ve been through the rules for this a few of times over the last couple of weeks, just for any late comers I’ll reiterate them one last time. Basically all you have to do is paint a figure (or better still a few) with some form of facial hair in the month of November, simple isn’t it. So for my first submission I thought I’d play safe and go with that bastion of the hairy “fizzog” Dwarves, but not just any old

dwarves “Dwarves in spaaaaaace!”, Now true to the title of this post I have indeed not done the old GW (now defunct) race of Squats, but instead have taken from the newer (but still now defunct) range of Scrunts, by the genius that is Mr Bob Olley (who also sculpted a lot of the original Squats for GW, but that’s another story). Anyway I have painted these exact figures before for Mo’vember, I actually only recently re-inherited these particular figures from my eldest, who had them, didn’t paint them, left them and eventually sent them back to me, this was in fact about a month or so before Simon suggested another round of this particular challenge, so it seems appropriate to finally get some colour on the poor little fella’s. Now as I said I had painted a group of these exact figures before, not really a problem I thought, I‘d just paint the beards different colours, but with the leader figure I thought I’d push the boat out (just a tiny bit) and sculpt him a new bushier bread over the old one, and I also added a “wolf tail” at the back of his helmet crest, really simple stuff, just to differentiate him form my original one.

First problem I had was having to scrabble about trying to find enough two pence pieces (Having not been out to the shop for nigh on two years has GREATLY reduced the amount of “small change” I have knocking about! Anyway I just about

found enough to do these and my next submission (just!), so once based and undercoated in matt black, I began by dry-brushing chainmail over all the areas that would end up metallic, helmets, shoulder pads, guns etc… then blue grey was painted over the long overcoats they are all wearing, so last time I painted these I highlighted this next, but this time I thought I’d hold off on this till the end (who say’s I don’t learn stuff!). Next I set to work upon their boots, belts and baggage, and all of this was first painted chocolate brown before I highlighted it with leather brown.

Then turning to their faces, I undercoated all these with European flesh and then after their eyes were added in white and black, a highlight with more European flesh mixed with a little pale flesh. Then I added their beards, these were either black highlighted with dark grey, chocolate brown with either saddle or Eurasian flesh highlights, chestnut with orange 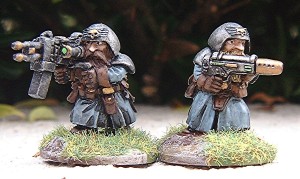 highlights or E.C.W buff with light sand highlights. Then it was a case of adding some highlights on their guns pouches and helmet insignias with an undercoat of bronze and highlights of bright gold (they are elites after all!), though this time to differentiate them from the other lot, I did the wings on the skull insignia on their helmets in metallic blue with steel blue highlights. Lastly here I added the odd dot of luminous green to represent LED’s on their weapons.

The leader of my little band is wearing a cape so this was undercoated in royal blue before it was highlighted in ocean blue, and the fur collar was done in chocolate brown and the dry-brushed in Eurasian flesh. And the crest on his helmet and the “wolf tail” were done in dark and mid grey. This was followed by a round of touching-up and then I went back and highlight their coats with a mix of blue grey and a

touch of white. Then as these had to match in with the rest of my “Scrunts” they were given a wash over with a 50/50 mix of matt black and water, before their bases were painted scenic brown (again a change to my new method of chocolate brown but again they have to match the rest of their ilk! Before they were dry-brushed with khaki and coffee, then areas were picked out in scenic green that were then flocked with summer mix hairy grass. Finally they went out for a coat of matt varnish and they were ready to take their places alongside the rest of my stout little chaps.

So that’s one (or seven) in the bag, but I am not alone in this “beardy” endeavour, a few others have decided to throw their hats (and razors) into the ring, so as promised here is a list of the other Mo’vember participants….

And a few late entries ( One who’d already done an entry without knowing it!)….

Please check out their smashing Blogs and give them a bit of support, so till next time…