Posted on August 13, 2021 by rantingsfromunder

A wise man once said that it is sometimes good to take a break from a longer project, with a quicker and easier one to renew you enthusiasm (actually it was Dave Stone, so I’ll so I’ll leave the “Wise” bit to your discretion 😉). But anyway I thought I’d take heed of these “sage” words and spend the week away from my bloody MDF boxes and do something else. Now I’m not turning my back on the “Scenery” challenge entirely as I thought I’d wade through all the “scatter” scenery we also

have for “dead Zone, some of which came with the game itself and some my youngest ordered alone with our first lot of “Slum Blocks” from TTCombat back in February. Well the good thing was that where was basically no cleaning was up to do on any of the pieces, though the TTC ones did have a good wash with detergent (even so the paint was very easily “worn” or chipped off these pieces during painting, luckily the “Quickshade” appears to have sealed them now (I hope).

So first up I had these sandbag emplacements, now after the matt black undercoat I decided that these (and just about everything else) were going to be a pain to hold and paint 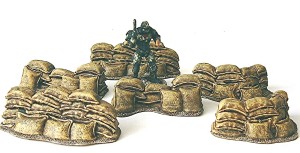 without the black and any subsequent colours rubbing off with handling, so I glued them down to some card and then cut around the base, stuck on some sand (so they matched the Dead Zone figures) then touched up the black around this new addition before I could get some colour on the “bags” themselves. I began this by giving them a heavy dry-brushing with some chocolate brown, this was followed by butternut, dark sand and sand in a succession of ever lighter dry-brushes, and that was it, simple stuff.

Then I had a selection of crate’s, three different types to be exact, so after they too were given a dry-brushing with some chainmail I did the long ones in German field grey with deep bronze green highlights as “ammo” crates, with the couple that are open with coffee and cream, pink burgundy and bright red added to the exposed “Missiles”. More pink burgundy and bright red with the odd touch of coffee and cream was also used on the “dagger” emblems on the smaller “Medical” boxes. Dark and light grey was used on the case,

along with some bronze on the bullet emblem’s of the medium sized boxes (not sure what we’ll use these for, but they will get used for something!). Now as you are probably aware I hate to waste anything so I had taken the MDF pieces I’d pushed out of the windows on our original “slum blocks” and glued these together to make a couple of larger storage crates the grey one is all MDF whereas the slightly smaller one I had to add a base and ends in cardboard (as I didn’t have enough pieces of MDF at the time), and added some “coffee stirrer” details at the ends too. So these were also added to the pile, the smaller one I painted in royal blue then highlighted with ocean blue and the larger in dark and mid grey. Both of these were then dry-brushed here and there with chainmail, then with chestnut and a little orange to add some rust.

I also had a few pieces of “Mantic” scenery that came in the game box itself. The two boxes (that instantly reminded me of up-dated versions of the ones that used to menace the

“Terrahawks” back in the day), will probably be used as “Loot crates” and were simply heavily dry-brushed in dark grey, then again in mid-grey, then I just added the “lights/eyes?” in shamrock with a “day-glow” light green highlight. Ocean blue dry-brushed with porcelain blue was used on the “Explosive barrels” and the triangular cases (No idea what these are supposed to be, sorry) I decided I’d do with orange centres with just silver end’s so after fifteen coats of orange (well not that many but a few!!), I highlighted the orange with more of the same mixed with some white to lighten it.

Next I set to work on the two “Communication” terminals (well they’re something like that) and four generators, again pretty simple stuff, they were all firstly dry-brushed with

chainmail and then I picked out the “40K” (not) iconography in copper. The screen in the side of the terminal was painted in German field grey, then I added some lines (to represent some text) in light (dayglow) green, and some details were picked out in bright green, orange or more bright red. I decided to not base up the terminal’s as they will probably mainly be placed on either inside or on top of buildings so I thought that best. Meanwhile the bars that run around the outer edges of the “genny’s” were undercoated in dark red, and then highlighted in bright red.

The Barrels (Oh my god! So many barrels!!), anyway the 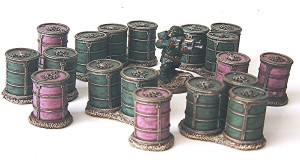 barrels were dry-brushed with chainmail, then I took five “special” ones, that I wanted to use to represent what Mantic call “Specimen Tanks” and these were individually based and painted fusia highlighted with lilac, whereas the more common or garden ones were based in groups of two/three and painted in German field grey highlighted with deep bronze green, these will probably just be used for cover.

Everything was then given a coat of “Quickshade” strong tone (as I said above, to help seal the surfaces as much as anything), then the bases were painted chocolate brown, dry-brushed with Khaki, and then again with coffee, again so as to match our figures. This was then followed of course by the obligatory blow over with matt varnish. So we now have some items to fight over or around, I suppose I’d better get back to the MDF boxes now, do I feel re-enthused? Hmmm we’ll have to wait and see…

Till next time stay safe & enjoy the scenery, cheers Roger.