Posted on June 26, 2021 by rantingsfromunder

Now I mentioned back at the start of the month that I hoped to have time to complete one more “hero”, namely Mary Death’s car from the movie “Bounty Killer”. Well things have actually gone a lot smoother that I’d expected, so I’ve been able to get this finished too!! Before I get into the re-painting (and a little converting) of Mary’s ride I thought I’d give you a little background as to what made me want to do this.

Partially to blame are Dave (The Imperfect Modeler) and Matt (PM Painting), who have both either built or hinted at building post-apocalyptic vehicles, and I’d mentioned that the “James Bond, collection” cars* were perfect scale wise to go with 28mm figures, and could be picked up on Ebay for various prices from £4.00 for the early edition cars up to £28.00 for the later less popular editions (the white Lotus, that blows up at the start of “For Your Eyes Only” is going for this price!, whereas the bronze one that replaces it is £8,00).

Anyway a bit later I watched the movie “Bounty Killer” during the first lockdown, and thought the character “Mary Death” would make a fun figure to do for “Forgotten Heroes” (see post at the start of the month**), Now Mary drives a

distinctive yellow Ford Mustang Mach1 in this movie (at least until it is blown up thirty odd minutes in), and the old brain cogs started turning… “Now doesn’t Mr Bond drive a Mach1 in Diamonds are Forever?”, I thought, a quick look on Ebay later and one of my Christmas presents from the wife was ordered ready to be desecrated later in the year.

than I was about the figure, I don’t want to sound big-headed here but you see I’ve got a general idea what I’m doing with the figures, but I really was making this up as I went along! But luckily the quality of the model was actually pretty good and at £8.00 including postage wasn’t really any more expensive than a lot of resin car kits (and you got the interior detail as well!).

I started by removing the Mustang from its base (this was actually the worst bit as it had a “triangular” head screw!) Then I split the base of the car from the body (luckily crosshead

screws!!) and removed the glass, interior, grill, rear lights and bumper. Happily I was also able to prize out “James” and “Tiffany” from the seats too, I thought I might have had to carve these away but they are separate “rubbery” plastic figures, so that was a plus! As I wanted the car driverless. I was then able to take some fine sandpaper and go over the removed body to form a “key” for the primer.

Next it was out for a couple of coats of white primer, and then a coat of matt yellow, This on further inspection was a bit lighter that the movie car, so once dry I gave the whole thing a dry-brushing with citrus orange, this seemed to work quite well, giving a rough slightly faded look (though on closer inspection it was now a bit darker than the original, sometimes you just can’t win!!). Now one of the front wheels on my car had rather dodgy paintwork on the chrome hubcap, so even though I planned on “weathering” these later on, I decided to give it a coat of chainmail, now this was darker and had less shine than the others, but as I said “weathering”, I also painted out the “whitewalls” on the tyres as Mary’s car doesn’t have these.

I turned my attention to the interior next, now even though you can’t really see much of this when the car is assembled I decided that bright red wasn’t going to cut in the dark future, So I repainted the seats and floor black, and then picked out the top of the dash and the door card inserts in chocolate brown, with some leather brown highlights. Next on the “to do” list was a rear spoiler, now apparently the actual owner of the car rented it to the production company and they added the boot spoiler and large “Mary” decal to the roof, though he was quite happy with these additions, and they still adorn the car (his daily driver) today along with Christian Pitre’s signature on the dashboard. Anyway my car didn’t have a boot spoiler so I was going to have to make one somehow, the answer “coffee stirrers!”. So taking a wooden coffee stirrer and sanding it with very fine sand paper I managed to get a pretty smooth finish, I then cut it to length (luckily the width was about spot on as was), I then cut off two of the curved ends and after sanding all the flat ends at an angle superglued these in place. Once dry I sanded the curves a bit to match the original more and painted it black, a couple of small blobs of greenstuff (also painted black were placed on the boot lid (trunk for any Americans) and it was glued in place. The front “splitter” was also a coffee stirrer, this time stuck to the plastic

underside then a curve was built up with more greenstuff, and again painted black.

As I mentioned above in an act of pure self-promotion Mary has a large decal of herself plastered to the top of her car, now luckily someone had posted this image up to the internet, and when I’d put in a search for pictures of Mary it had also come up, so after a bit of messing about re-sizing the image I was able to print it out and a bit of PVA glue fixed it to the roof. I did consider painting this free hand (No I really didn’t!!!).

Now the bit I’d been putting off for as long as possible was finally here, the black stripes down the side of the car and the bonnet. I knew these were going to be awful to do and I almost left them off, but then it wouldn’t look right so…I started by masking off the lower areas of the bodywork and painting them in black, but once I took the tape away there was some “bleed”, in fact the area that looked the best was the bit ahead of the front wheels that I’d done free hand! Much head scratching ensued, until I decided to do the bonnet freehand as well (which I’m rather pleased with the result of if I’m honest). Now the “bleed” marks along the sides I could cover up with a line of chainmail as a chrome strip runs along here on the original, but the upper stripe didn’t have that. In the end I got some stickier tape ran this along to make the horizontal lines, painted these in as best I could, and did the small thicker lines running down at the front by hand. I also added the Mach1 badges badly by hand too. Much touching up with the citrus orange followed, and though they still weren’t great they were better. I had now got a plan to try and cover as much of this as possible with some liberal weathering.

That was next on the agenda, well after I’d added the indicators in orange anyway. So I decided the best way to

tackle this was to do the wheels and underbody first so I could get to the inner wheel arches and all the tyres, one good dry-brushing with some saddle coloured paint later and I was ready to glue the wheels to stop them spinning I just prefer gaming pieces this way (and this would also stop me pushing it around and going “Brum,brum” and yes I had been!). The grill, rear bumper and lights along with the number plates were now put back onto the car before I gave the upper body a good dry-brushing too (well it would have been driven hard through the desert, so it was going to be dirty!), I then put the two halves of the body together, but without the glass and interior, and gave it another lighter dry-brushing with Eurasian flesh, paying special attention to covering up the worst of the side stripes!

I then took it out for a coat of matt varnish, this unfortunately, 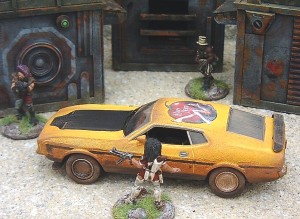 dulled the picture of Mary on the roof quite a bit, but a thin coat of PVA glue brought it back just enough to look worn but visible. All I had to do now was lightly dry-brush the windows, I put a piece of tape cut to the windscreen wipers sweep shape on the front screen before doing this then re-assembled the whole thing putting the screws back in to hold it all together. I have to say I’m quite pleased with the result, it’s not perfect by a long way, but it has come out better than I expected.

So that brings my part in “Forgotten Heroes 2021” to a close, I have to say I’ve thoroughly enjoyed this year (as always), and all the entries from the various people taking part this year have been magnificent (again as always). I’ve already got a couple of ideas for who I’d like to have a go at creating next year, of course in eleven months’ time that could all have changed. It’s Dave Stone’s “Season of Scenery Challenge” for the next two months, so that’s what I’ll be doing till September. So a final thank you to Jez for coming up with this wonderful challenge.

I’ll leave you with a fun fact, did you know that Max’s ride in Mad Max was going to be a Mustang, but it was decided that car and spares availability would be easier for the Australian made Falcon at the last minute?

So till next time, stay safe and cheers Roger.