Posted on June 6, 2021 by rantingsfromunder

So we are now deep into what I like to call ”Challenge Season”, this is the four months “slap bang” in the middle of the year where I have three “Themed months” one after the other (actually Dave Stones “Season of Scenery” is two months long, but that’s just because he’s greedy!). So having just come to the end of Keith’s “Monster May(hem)”, it’s straight into Jez’s “Forgotten Heroes”, and this year in a departure to my last couple submissions to this I’m not going to be making anything to do with “Masters of The Universe”, instead I hope to create two (or possibly three, dependent on your viewpoint) heroes from very different visions of the future.

Now I watched a lot of films during last year’s lockdown, I mean a LOT!, some were bad, some were terrible! And some were so bad they were good! A few (just a few) were actually just good (surprisingly so). “Bounty Killer” (2013) was one of these based on a Kickstarter graphic novel and short film of the same name, it’s, set in an apocalyptic future caused by 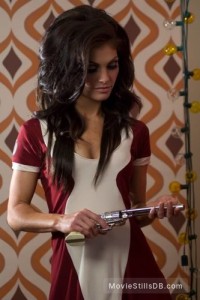 wars instigated by the corporations…(Blah, blah, blah) all you really need to know is corporate business men are now considered criminals with bounty’s on their heads, and the champions of the populace, are the “Bounty Killers” who are paid to bring them to “lethal” justice. Most popular (and pin-up girl) of these is “Mary Death”, played by the “very” easy on the eye, Christian Pitre (in both screen adaptations). Definitely one of the better “Post Apoc” movies this is well worth seeking out if you haven’t seen it, it’s currently free on Amazon Prime, and 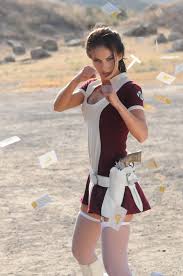 Youtube, and there are much worse ways to spend an hour and thirty minutes.

So my first submission will be the “star” bounty killer “Mary Death” herself, and my third will (hopefully) be the lovely ladies bright yellow Mustang “Mach1” (As the car used mostly for close ups is known as the “Hero car” I’m going to bend the rules a little and count it as my third “Forgotten Hero, hence the red one in the photo). But putting the Mustang aside for the moment I will concentrate on the lady herself first, and if time allows turn to her “wheels” before the end of the month. Now Mary was a much simpler figure to complete than my scratch build entry as she’s really just a case of “tweaking” the original figure with a bit of the

old “greenstuff”, and said figure is once again one of the ladies from Copplestone Castings, “Babes with guns” pack, actually this figure is probably my favourite from this pack, and perfect “conversion fodder” to make a “Mary Death” figure.

Mary needed some minor surgery before I could add any greenstuff to her. So taking a scalpel and files I removed her long hair leaving just a little “on top” as they say and filing down her boot tops closer to her legs (as I hope these can be used for her stocking tops), sorry for the awful photo by the way!

Next day I was ready to start adding her accoutrement’s, this began with her boots, now I was able to leave her feet untouched as these were pretty much fine as they were, so I ran two small sausages of putty around just below her knees

and dragged and smoothed these down her shins to her ankles. Then I set to work on the lower area of her “mini” dress so another sausage of putty was run around her waist under her gun belt (now the eagle eyed amongst you will notice that her holster is on the wrong side, but honestly it doesn’t bother me (too much), so I’m going to live with it, anyway I then smoothed and dragged this down to the required length (which isn’t very long!) and added some folds and ripples with my pointed shaper. 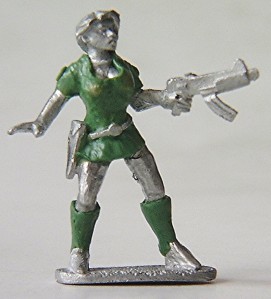 The rest of her dress was added next day, this was simply a blob on the back and another on the front and spread out to meet at the sides, I pushed in a bit of a collar around the neckline, then added to tiny sausages around her upper arms to make the short sleeves. Two tiny balls of putty were then rolled out and pushed and flattened onto the outer edges of her sleeves to form the badges she wears there.

Now in the film she (sometimes) has a long holster/bag

behind her left shoulder that she keeps a sawn off shotgun in, now after close inspection of the film the strap for this appears to go into the shoulder of her dress (though sometimes it’s missing entirely, continuity eh!), so I did “um & ahh” over whether to add this or not, in the end I rolled out a short sausage of putty and plonked it on in place, then smoothed it to shape and after pushing a hole into the top added a small curved sausage to represent the handle of her shotgun. Lastly today I added the three visible suspenders between her dress and stocking tops (well you wouldn’t want then falling down now would you!!

Very little was done the next day, I just added her knife and scabbard, this involved taking a tiny sausage of putty, and applying it just above her belt, then a slightly larger sausage was added two thirds of the way down this and flattened out and shaped, the hand guard of the knife was cut into this with a small knife. And that was it (No photo, but you can see it in the next one anyway).

I really wanted to finish her off today, but first I decided to stick her down onto a two pence piece, I added a couple of pieces of coffee stirrer under her base to give a little height. Then it was hair today! (Gone tomorrow, to caption my pain!!) Mary on the other hand has lots of hair, so I stuck three blob’s of putty on the right, left and back of her head and this was then spread about and the texture was “tapped” in with the blade of a small knife. Now she is finally starting to look a bit like Mary. Next I ran a couple of tiny sausages of putty around her ankles, as in the film she tends to wear “spurs” (mainly for

stabbing people in the neck with when she kicks them!). Anyway once in place I used a pair of tweezers to tease out the back of these sausages, into a flat “blob” and then shaped these into rounds. The only other thing I wasn’t really happy with was the back of her machine gun was a bit of a mess where I’d cut the hair on the original figure away from it, so I tidied this up with a touch more putty, oh and there was a tiny hole in her thumb, that I think was a bit of a miscast on the original figures so I filled this too.

Hopefully next week I’ll have completed the sculpting of my second entry, then it’ll be basing and painting on both, so till then, stay safe and cheers Roger.