Posted on March 13, 2021 by rantingsfromunder

Back to the 10mm Wild West again this week, fliting from one scale and genre to another has really helped with stopping either, getting stale or enthusiasm dropping off. Anyway I thought I’d set to work on getting the “Settlers” done, now these were already based and undercoated so it was just a case of touching up the black where they had had their unfortunate accident (see post “One little, Two little, Three Little…” to read about this), and I could get on with the painting.

Then it was the turn of the cowboys, these were again broken down into three groups of the three different poses (not counting the mount one). But as they were all painted in exactly the same manner I’ll cover them all together here. Again working from a black base

these chaps in the rules I’m writing yet!), were painted in the same manner as the others, and their horses were painted black with dark grey highlights and chocolate brown with chestnut highlights, a couple of socks and nose bases in coffee and cream and bed rolls in light grey (mixed from black and white, as I haven’t actually got a light grey, so must buy one soon!), completed these too. While I was painting this little lot I also completed the lone

Indian that I’d missed when the rest of his “tribe” were pigmented!

All of these were then coated on “Quickshade” (Strongtone) and once dry they had their bases painted to match the Indians, that is Musket brown dry-brushed with a layer of sand and then coffee. As usual a final spray over with some matt varnish complete them. 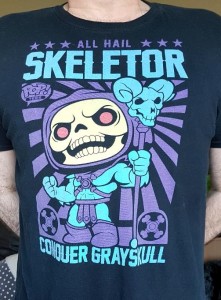 all-time favorite characters to make an appearance…”Skeletor” well there had to be a “Masters of the Universe” connection in here somewhere as often at this time of year I’d be into full “March’ters of the Universe” mode. This is actually the “Funko Pop” version of the master of Snake Mountain and was bought in a sale at our local Comic Book Store over in Liverpool a couple of years back. Though not a “Funko” collector myself I really like this T-shirt and apparently it’s a limited edition!! (How limited I don’t know though, probably just a few hundred thousand).😉

Till next time, stay safe, and cheers Roger.

21 Responses to “Meet The New Neighbour’s”