Posted on March 4, 2021 by rantingsfromunder

Back to plastic this week prompted by the eventual arrival of “Dead Zone” by Mantic Games (we ordered this before Christmas!). Now I’ve been after getting my hands on this game for a while as it came with a good recommendation by my eldest son (who also has a copy) and the idea is that my youngest and I have a few games to get familiar with the rules then when the eldest can finally come to visit again we will all be familiar with the rules and play together. So on first opening the box we discovered a large amount of plastic,

including some figures of a couple of the main protagonists (the Forge Fathers and Enforcers/Pathfinders) and some of Mantic’s “box like” scenery, there was also the latest supplement (Escalation) for the Dead Zone rules, but what was obvious in its absence was the actual “Dead Zone” rulebook! Apparently you now have to download a “virtual” copy of this and a code is provided to do so. Now call me old fashioned but I do like to have a physical copy of any rule set I’m using, and this though I can see is a cost

saving and Dead Zone is quite a lot cheaper than “Kill Team” (GW’s similar game), I have to say I was more than a little disappointed. This appears to be a new thing (probably with the introduction of “Escalation” as my eldest got a copy of the rulebook in his version, and the addition of a “sticker” over the original contents list on the box all points to this.

Anyway he was at least able to email through the assembly instructions (which are in the main rulebook), along with the advice that the best thing to do was just assemble the figures needed for the opening scenario (4 to 5 figures a side), see how you get on with them and then build the others later with whatever weapons you

So I thought I’d start with the “Forge Fathers” (Space Dwarves to you and me!) mainly as I had a general idea as to the colours I was going to use on them. So after they were glued together, which was still a right pain in the bum, but strangely not quite as bad as the “Blood Bowl” figures seemed perhaps I’m getting used to it! (Time to stop I think!), they are glued down to their 25mm round bases, I did consider basing them on two pence pieces as is my norm, but as I planned on “topping” the bases differently to usual I thought I’d use

the ones provided. Now this is the first time I’ve used my basing sand (as recommended by Roy Williamson!), on 28mmm figures so I built up several layers, one across the whole base then just blobbing the glue “willy, nilly” about the place, I also stuck a few “kitty litter” rocks here and there to add a little interest. Then it was out for a spraying with some matt black, and after they were touched up with a brush, the painting could begin proper.

I began as usual by dry-brushing the guns (and hammer) with chainmail, then all of their armour was painted in German field 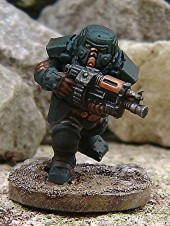 grey, and highlighted with dark turquoise. The bits of under clothing that can be seen were then undercoated with dark grey, and I had meant to highlight this with blue grey, but after doing the first figure, I decided I didn’t like this at all, so recoated the dark grey before mixing up a light grey from black and white and using this to highlight said areas. The gloves, belts and the odd other area were then painted in chocolate brown before being highlighted with leather.

I then added the eyes on their helmets these were done in light green before I added a dot or pupil with some “Fluorescent” light green. I also added lights with these colours to their weapons. Lastly I added some accoutrements to their armour with a little bronze with copper highlights.

As usual I them gave them a coat of “Quickshade” (Strongtone) before setting to work on the bases. Even though I’d used sand instead of filler, I still used my old faithful trio of chocolate brown, khaki and coffee here, I did however forgo the 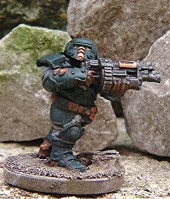 patches of scenic green and the hairy grass (even though I did go back and forth, in my mind over whether to or not). I rather like the finished figs, I think they have quite a mean look to them, and better still even the youngest, who never compliments or gets excited about anything, said “They were nicely painted” praise indeed!!!

Now Luke (IRO) is running a bit of a challenge this month, but rather than figures, it’s to post pictures of your favourite T-shirts so lastly this week, here is the first of mine, bought from an independent seller at a comicon the year before last, well you’ve got to own at least one T-shirt with some polyhedral die on, even if I haven’t roleplayed for years!

So till next week, stay safe and cheers Roger.