“The Strange Tale of Cletus Tanner”

Posted on July 25, 2020 by rantingsfromunder

“Why not, is it deep? Is that why you have the danger sign?” 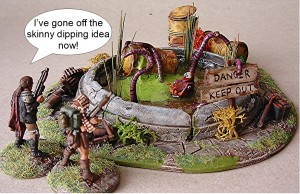 “Yep sure did! That or it might be Cletus’, we ain’t none too sure either way”

OK when I left you two weeks ago I was just about ready to “Quickshade” my pond, but before I could do that there were a couple of outstanding jobs that needed doing first. The main one being the sculpting of the monster that resides in said pond (be it “Cletus Tanner” or not! I’ll let you decide), so some “Greestuff” was mixed up and using my “comb” technique again I rolled out some worm like tentacles draping them over the pond and various other stuff to get the shapes I wanted. A teardrop shape was then made and I basically created the simple head as I went along, next day I added a wristwatch to one of the tentacles and a baseball cap to the head. I undercoated these in plum and highlighted them in the same mixed with lupin, some orange highlights on the head, a gold watch and red and white cap and he was done.

I also made a sign out of a matchstick and a coffee stirrer, and printed out another sign this time for the side of the car battery. 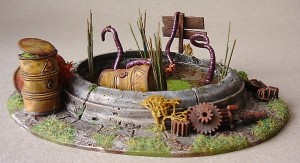 Then everything was given a coat of “Quckshade strong tone”. Once dry more chestnut and orange was stippled over the rusty bits, I then gave all the stonework another light dry-brushing with a very light grey (mid grey and white) then painted up the edges of the base in chocolate, khaki and coffee to match the bases on my figures. As usual this was then followed with patches of scenic green that were flocked in summer mix hairy grass. The rubberized moss came out next and a few patches of this were superglued here and there. I wanted some plants growing in the actual pond itself so taking the old “dustpan and brush” I hacked a few bristles off (my wife will never notice, I hope!) and painted some of them scenic green, some leather brown, some bronze green and a few khaki. I mixed and matched these up, the ends of these were then superglued together and these bunches were pushed into blobs of greenstuff. These were then glued into the pool and then it went out for a spray coat of matt varnish (the head and tentacles were not matt varnished as I wanted then to look wet).

Once dry the tentacles were also glued into the bottom of the pond, I didn’t add the head yet as it needed to be at the right height to sit with the top of the water just below his eyes so I measured the height at the inner edge of the pond in relation to the height of the head (hope that makes sense, you’ll see what I mean later on). I also painted the visible inner part of the open drum in a mix of lime and mustard yellow, mixing them roughly in-situ to represent the toxic waste.

Next day once everything was good and dry it was time to add the first layer of “Acrylic Water”, first pleasant surprise is that I doesn’t

smell! You don’t need to mix it so it was just a case of cutting the nozzle off of the bottle (there is a cap to cover this between layers), and squirt some into the pond, I added about a 2mm layer and rocked the piece to get the whole base covered. I then dripped a little chocolate brown and khaki paint into this and swirled it about with the back of a brush (I think I did this a bit much as it pigmented the whole lot muddy brown!), I then lest it to dry, now it says that in warm conditions I should take about 24 hours, but mine took 48 hours (and it was blooming warm enough for me!), so to do all the layers was going to take a while (hence the lateness of this post). Anyway eventually I was able to add the second layer, and this one I left mainly clear but swirled a little khaki through it.

Another round of measuring told me I was now at the right height to add the head, so that’s what I did then added another layer of the acrylic and this time I also dropped a couple of blobs of lime green and mustard paint into a pot and then added more of the acrylic to this, then I swirled it all about to mix this them dripped a bit into the pond up by the floating drum. Using a cocktail stick I teased this out into swirls and left it dry. Next day I mixed some more of the paint into some PVA wood glue and leaving a couple of “runs” out to dry these were then glued one dripping out of the floating drum and one down the side of the open drum. More PVA and paint was then mixed up and teased/dripped along these dry lengths to form

“runs”. I added a “pool” at the base of the open drum and painted the visible bit under the open lid with more PVA to give it a gloss finish.

The next layer of acrylic was added in the same manner as the last, but with a slightly smaller green painted area, I also added small painted spots of “moss/algae” around the outside of the pond in sap green/khaki and olive green mix in-situ (should really have done this before I started adding the acrylic!). When it came to adding the next layer I just painted a little of the lime green and mustard around where the “run” landed in the pool, then added yet another layer of acrylic (you can see why this has taken so long now can’t you!). The last two layers of acrylic over the next couple of days and once this was finally dry I added a few “ripples” around the head, tentacles and drum by dipping the point of a brush handle into some PVA wood glue and gently “drawing” them on. And it was finished (thank the

Looking at the finished piece, I have to say I’m very happy with the end result, it looks just like I had imagined it, but by GOD it was a lot of messing!! I do like the idea of familiar things being left over after society goes to hell in a handcart, the local woods where I occasionally take the dogs for a walk was a Victorian amusement park and there are still some of the fountains and pools there in an overgrown state to be seen as you walk around, and this was part of the inspiration for poor Cletus’s resting place. I’ll finish this post with a thank you to Dave Stone for coming up with the idea of “The Summer of Scenery Challenge”, it was just kick up the arse I needed to get this done, I think however if we do this again next year I might just stick a few plastic trees to a wooden base!

Till next time, stay safe and cheers Roger.

26 Responses to “The Strange Tale of Cletus Tanner”