“Forgotten Heroes, Roaring Toward the Finish”

Posted on June 20, 2020 by rantingsfromunder

Well here we are again at the end of another week of “Forgotten Heroes”, and this week I really wanted to finish the sculpting on my two “Big Cats” as two weeks in and all I had to show was the heads! The saddles on both needed doing, so less talking and more sculpting was going to be the only way they were going to get done, sorry that this is a bit of a long post, but it’s been a bit of a long week! So if you’ll excuse me we’ll crack on…

I had decided that the best way to tackle the saddles was to do them both at once, that way I could reference then to each other as I went (though that didn’t work out as well as I’d planned, but we’ll get to that in a minute!). Anyway I mixed up some putty and divided it in

half, then took a small amount of each and rolling them out into two sausages (I do use the word sausage a lot on this blog, sometimes I wonder if people searching for a pork lover’s blog are directed here by mistake! Sorry sidetracked!) laid one across each of the backs of my cats. Taking my pointed colour shaper and turning it around I used the handle to push in the saddle seats by rocking it back and forth across the backs. Once I was happy with this I took the remaining two blobs of putty and after rolling these out into “you know what!” placed these in front of the saddle seats. Smoothing and blending ensued until the ridges at the front of the saddles were achieved. I left it at that for today.

Looking at yesterday’s work again I could see I had put Battle Cat’s saddle to far forward when it was compared to Panthor!! (So much for doing them at the same time so they would match!). Now this was a problem as I was going to have trouble fitting in the armoured plates ahead of this on Battle Cat anyway as his helmet extends back further than Panthor’s head does, but what to do. Now I really (REALLY) didn’t want to have to do Battle Cat’s saddle seat again so if I could prize it away without breaking it…which I managed, I was able to take a needle file to the inside and after filing away a little was able to superglue it back on a little further back. I should have used the stripes on their backs for positioning (he says now!).

So now that the saddles were both in the right place I could crack on with the plates in front of the saddles, so some putty was mixed and divided into two even balls. I tackled Battle Cat first running a sausage across his shoulders them smoothing this down and tapering it back towards the saddle. I then pushed in the ridge to

form the second plate into this before adding the two small circular parts at the back of the plates, once I was happy with this I added another sausage in front of the front saddle ridge and blended this in. I then added some small disks (these were just balls pushed flat) and then after pushing a small circular “dent” into the middle of these added the horns/spikes (there should really be three at the top, but felt there wasn’t room so went with two instead). Turning to Panthor next I decided that you weren’t going to be able to buy a saddle for a big cat off of the shelf, so as unlike Mattel I didn’t need to mass produce these things I could afford to make a different saddle for Panthor. So using the same basic technique as I did on Battle Cat, I formed a similar shaped piece over the shoulders but stretched the top centre forward up the neck slightly, then added a curled edge and a small skull to the top (well it is Skeletors cat!). Lastly as the putty was beginning to go off, I again added a couple of spikes either side. This means Panthor is now slightly behind Battle Cat as I still need to add the front of the saddle ridge. But I’m still okay for time so no panic yet.

I added the straps that run underneath the bodies next day, these

were just (you guessed it) sausages!! Run underneath the bellies then smoothed out and another smaller sausage added across these each side just under where they attach to the saddle. I then added blobs of putty just under this on one side and flattened these out into a triangle, and added two “spare” belt holes. I had enough putty left over to add the front of Panthors saddle ridge and three more spikes along the top of this.

I started the at other end of the saddles

next day, again I decided to vary the designs a bit, so when it came to adding the small plate that reaches the tails I did one wider on Battle Cat than on Panthor. This was also repeated on the next one along with two curves that culminated in a point on Panthor’s. Also today I made the backrests, these were just a couple of “croissant” shaped bits of putty that I pushed flat between some plastic and left to dry, I will file them to shape and glue them on tomorrow. Lastly today I took a couple of my 60x40mm MDF bases and using a “two pence piece” as a stencil cut out a couple of lozenge shaped bases ready for when they are finished.

Much sanding and cutting was done to the backrest today before

they were stuck in place, then I added the next “back” plate on each, again I did them different shapes with Battle Cat’s just a gentle curve and Panthors sweeping in to a central point, and that was it for today.

At the back of Battle Cats saddle there is a bit of scroll work, this I though was not going to be a problem (Wrong!!!), all I needed to do 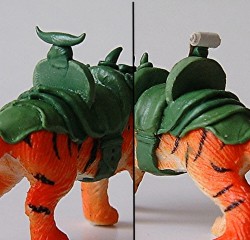 was roll out some putty in a “V” shape and roll it up, simple (Wrong!!!) could I do this? Could I buggery! Much swearing and thinking ensued (but mostly swearing!), finally I decided to take a leaf out of Jez’s book and think outside the box (or stuff, in this case), so taking a piece of cardboard I rolled it up as tight as I could, then unrolled it again, cut it into three “V” shapes (I hoped one would turn out OK), and re-rolled them again even tighter, with a “dab” of wood glue to secure them, once dry I mixed up a small amount of putty and a tiny blob was set atop the back of Battle Cat’s saddle, then the best paper roll was sat on top of this. Again I decided to alter Panthors saddle so after another blob of putty was placed on his saddle, I pushed a tapered sausage across its top, curling the ends up like horns, then left both to dry overnight while I went upstairs for a little cry!

Now I’m always saying that you should have patience, not rush things and not to tackle to much in one go, but there also comes a point where you are sick of the bloody sight of things, and these two

cats had just about reached this point, so I decided the sculpting was going to be finished TODAY. Fortunately all that was left to do was to completely cover the saddle back and blend them into the surrounding pieces, this I did in two stages. Firstly the front faces were covered and smoothed and putty was added over the tops of the decorative items (horns and paper roll) that I’d added yesterday, and then later once this was firm(ish), I added the side and backs adding a ridge around the back and down the rear edges of the sides, and blending in the bottom with curves to match the armoured plate behind.

Thank god, they are now finished, all I need to do now is base and paint them, All…..hahhahahah!

So till next time, stay safe, and cheers Roger.

24 Responses to “Forgotten Heroes, Roaring Toward the Finish”