So as I stated last week all I had to do this week was paint the monster I sculpted for Monster May(hem), people seem to be giving these things names during this challenge, so I’m going to call mine “Keith”, for no particular reason 😉 .

As Keith was already based up I was able to get straight into the undercoating, now I still haven’t been able to get to the shops to buy another tin of black spray paint, so this was done with the old brush and pot of acrylic. Turning to the body shell I put down another undercoat of aquamarine, then mixed up some more of the same 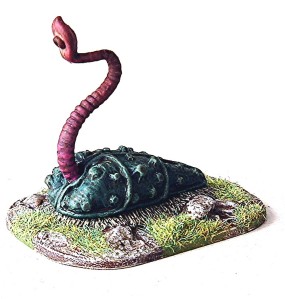 As for the neck and stinger “face” I painted the lower portion with some plum, and the upper with dark red, then while they were still wet blended them into each other. Then highlighted the rings with lupin at the bottom and pink burgundy at the top, by putting a blob of each colour on a pallet (I mean Pringles lid!) I was able to gradually mix the two colours so the rings would graduate down the neck too. I added some European flesh and coffee to the area around the “mouth” to lighten it and make it stand out a little more. 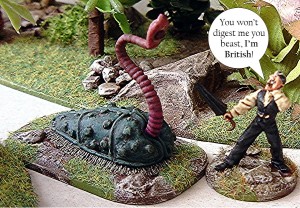 Lastly after touching up the black on the “frill” at the base of the figure, I heavily dry-brushed it with khaki and them lightly with coffee ( I was a little worried that this would blend into my basing as these are two of the colours I use here, but the Quickshade seems to differentiate it enough). Talking of “Quickshade” that is what came next as I painted the whole thing with a coat of “Strong Tone”, before I painted the base with chocolate brown, dry-brushed with Khaki and coffee (see I said I used them here), and then I picked out areas with scenic green that were later flocked with some “Javis”, summer mix hairy grass. A final spray coat of matt varnish took the shine off of everything and Keith was done! I thought it appropriate to add my “Peter Cushing” figure to the above photo 😉.

Now that is not all I’ve done this week, as promised a while ago, I have also had a bit of a mass “Quickshading”, basing and varnishing session. While I do relatively “boring” jobs like these I find it is the perfect time to listen to “The Imperial Rebel Ork” podcast!* (see link bottom of page). Now for those of you not in the know “IRO” or Luke to his friends (so IRO to me) puts these out twice a week and though mainly “GW” focused they are well worth a listen. Sorry plug

over, anyway as I said I’ve been a busy boy and so I can now reveal the final finished versions of…

My 42mm “Dan Dare” figures, these were based very simply by painting the bases

dark grey and them dry-brushing them with light grey and finally very lightly with coffee. I wasn’t happy with the Quickshade’s effect on the “Treens” white upper body and helmet so went over these with another highlight of cream. I sent these pictures over to Ian at Irregular Miniatures and they are now also up on their site.

25mm Knights next and the bases

on these were simply painted scenic brown heavily dry-brushed with scenic green, before they were flocked with “Javis” pasture green flock. And my “Tinman” ladies were based in exactly the same manner and with the same paints as “Keith” above. That was a lot

quicker to write than it was to do I assure you!

I have also finished the bases on my “Barsoom” figures but this post is already picture heavy enough, so I’ll probably post pictures of them in next weekend’s post.

Oh and the title? Well why not it seems a popular choice at the moment, till next time… Stay safe, cheers Roger.