Posted on March 21, 2020 by rantingsfromunder

Well first off I have to say it feels rather strange writing a blog post as I haven’t done one for a while, and no this won’t be the start of a new weekly posting regime for me, but like so many of us around the world at the moment I have been sent home for at least the next two weeks due to this virus that is sweeping the world (this I hasten to add is preemptive on my companies part and not a case of self-isolation). So to help pass the time in-between working my way through all the terrible “B” movies available on “Amazon Prime” (and believe me there are a few!), I have also been working my way through a large pile of old issues of “Miniature Wargames”, Wargames Soldiers & Strategy” and “Wargames Illustrated” that a friend at work passed over to me during his last clear-out. Now I have to say that I have never been a big buyer of the wargames “Glossies” though I have bought the odd issue of all of them over the years (too blooming tight I guess) and to be brutally honest this playful skip down “back issue” lane has done little to prove to me that I’ve been wrong all these years. Though some issues have had some very good articles on various aspects of the hobby (painting, model building, period backgrounds, and reviews (I do love the reviews, always have) etc…) and some issues have five or six articles I’ve read, just as many have had nothing but a quick flick through the pretty pictures before being consigned to the bin with a “Glad I never paid for that one!”

Anyway ranting aside (though that is the title of this blog after all) what is it that has compelled me to put pen to paper (or rather finger to keyboard), well to be truthful, it was a couple of adverts, or to be more exact “adverts masquerading as information”. Now I don’t normally have a problem with these, as Mike Brooks the old owner of “Ainsty Miniatures” used to say to me back when I was doing the review columns in “Valkyrie” and “Ragnarok” “As long as you say nice things about my stuff, it’s cheaper for me to give you a load of samples than it is to pay for an advert!”. Likewise if you write a scenario for ACW that just happens to coincide with your new Unionist Cavalry going on sale, well more power too you I say, but these two “features” just seem to be so naïve and badly done that they had me laughingly shaking my head with thoughts of “what the hell were they thinking!!”. That I thought I’d have to share them with you lot.

The first one comes from way back (seems like only yesterday to an old fart like me!) in 1988, and issue No62 of “Miniature Wargames” which apparently only cost £1.15 (not really relevant but even so £1.15!!!). Anyway David and Geoffrey Lacey of “Fortress

Models” had submitted a piece on “The Siege of Sebastopol” during the Crimean war, interesting enough stuff but turning to opposite page we are treated to the true reason for the piece as the two gentlemen in question appear to produce figures to re-enact said conflict, surprise surprise! I say appear as the tiny “blobs” that can be seen if the three photographs could just as easily be Napoleonic riflemen or even commuters waiting for a model train, this is not a swipe at the figures themselves but the pictures that seem to contain vast quantities of the (frankly) less than inspiring surrounding scrubland! Now I know the authors wanted to show what the battlefield was like, but if this is how many men fought it, battle is a bit of an exaggeration! (I’ve seem bigger battles for toilet rolls in supermarkets this week!). Now I have to applaud the chaps for not using these images as shameless chances to show off their own wares, but I think we could have forgiven them at least one close-up of the figures in question, as these wouldn’t have inspired me send for their catalogue (or probably lists back then), play out the scenario or even read the attached piece. Just a sadly missed opportunity. I have had a bit of a trawl of the net to see if “Fortress Models” is still going or not and though there a couple of companies with this or similar names none seem to match the address, so sadly I can’t check to see if they have improved their sales techniques of not.

The Second and in my opinion much less forgivable one comes from 2012 and the really “thick” 300th special edition of “Wargames Illustrated” (we are up to £6.00 by now by the way), and is by “Flames of War” and consists of ten (yes ten!) pages of fluff 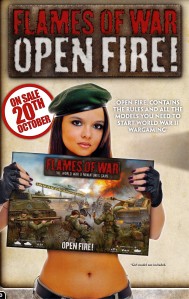 and pretty pictures promoting the (then) new “Open Fire!” edition of the game, as you can imagine all the paintings, maps and painted figures are all beautiful, but it is the photo on the ninth page that had me snorting my tea.

Here we were presented with what looks to my fifty something eyes as a mid-teenage “army” girl clutching said game to her naked chest (I guess she must have used her shirt for bandages), exactly which of the allied or axis forces used highly made up 14 year olds with lacey fingerless leather gloves I can’t tell as she seems to have also lost her cap badge! Now who this is supposed to appeal to I really can fathom, as a lot of the gamers I know actually have children older than this and so would have to be rather “creepy” to find this appealing, in fact I think most of us would breathe a sigh of relief at the legend “*Girl model not included”, as we’ve had more than enough teenagers at home

to last us thanks! (As an aside she must also have extremely long thumbs or the box is only 20mm thick).

Perhaps the idea is young teenage boys would rush out to buy it in the hope that theirs will be the box from the advert (you know when they aren’t sniffing bicycle seats, sorry). I’m sorry but I really just don’t get it! If they had used a “grizzled” looking chap dressed in US marine or Wehrmacht fatigues, or even a “Helga” or “Michelle of the resistance” lookalike from “Allo Allo”, I would have understood (in the latter cases probably even chuckled), but something about this just seems wrong and to my mind cheapens the product. I would be interested to hear your opinions.

Anywhoo’ that will do for the moment, time to go and watch “Spawn of the Slithis” on Amazon, but you never know I might post again in the coming weeks (months?), and if I get really bored I might even get the paintbrushes out!

Till then, cheers Roger.

This entry was posted in Uncategorized. Bookmark the permalink.