Posted on November 30, 2018 by rantingsfromunder

Right well as you may (or may not) know I have been spending the month of November finishing off my remaining Scrunt’s by the inimitable Bob Olley, the light infantry to be exact and I am happy report that the fourteen figures are now finished

(yes just fourteen figures batch painted in a month is a bit the meager side but other things have got in the way of progress on these chaps, but more on that at the end of this post). As you will recall when last I left you they looked like this….

But as I said progress has been made, and even though there wasn’t that much left to

do on them it’s taken me this long to do it! Anyway this is how it was done. Last time I finished with adding the undercoats to their facial hair in either chocolate brown, dark sand, light sand, chestnut brown, or dark grey, and I said I would last time I then highlighted these in chestnut brown, light sand, lemon yellow, orange or butternut or mid grey

respectively. Next I set to work on the “shades” seven of them are sporting, re-touching up the black before adding highlights of dark grey. Now I wanted to be able to spilt these chaps into two clearly defined (and reasonably equally armed) units, and the easiest way I could think of doing this was to do one lot grey “Ushanka” style headgear and the others

brown. So that’s what I did next undercoats seven in dark grey and the other seven (why do dwarves always seem to come in sevens?) in chocolate brown. These were then dry-brushed in mid grey or a mix of chocolate brown and cream. That really just left a few details to add to their weapons and belt buckles in copper and the pipes and tanks on the flame thrower in dark red highlighted with bright red, and they were ready for a

After this was dry they had their bases were painted scenic brown (a change to my usual method of chocolate brown but they have to match the rest of their kin done before I got my chocolate addiction!) Then they were dry-brushed with khaki and coffee, then areas were picked 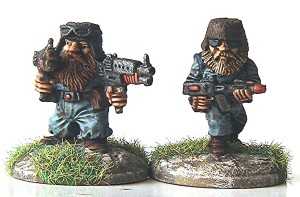 out in scenic green that were then flocked with summer mix hairy grass, quite frankly unless you really look closely at them you can’t tell the difference between these and my newer method. Finally they had a coat of matt varnishy sprayed all over them to de-gloss em’ a bit. Well that brings my Mo’vember postings to a close (and just in time too!)

Now as I mentioned earlier in this post I have had one or two things vying for my oh so precious time, chief amongst these (well that you lot would be interested in anyway) was painting up a shield that Dennis (my cosplaying in-law) had made to further 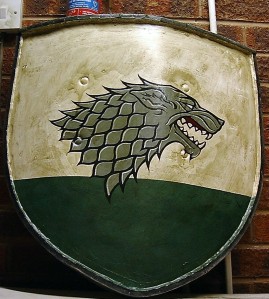 enhance his “Game Of Thrones” winter collection (not available in stores, but you never know, give him time!), anyway this was constructed from foam garage flooring tiles and then presented to me for painting, which I did with various emulsion “match-pots”, and Acrylic craft paints, the dire-wolf head was printed out on two sheets of A4 and once glued in place I painted over the whole thing again (as the printed version looked a bit crap TBH). This will now join the Sword I re-painted, the scabbard I made from scratch, and the helmet and armoured vambraces that I have painted to match the other pieces of his armour (I know I haven’t mentioned some of these bits before, but I’m just so darn modest!). Hopefully this will be the last of these costume bits (as frankly there isn’t much left of him to hang any more on!).

Long term readers will probably be aware that I usually take all of December off figure painting as I get dragged into preparations for “that” day, but this year I do hope to get one last lot of figures done before the year ends, so till then…