Posted on October 27, 2018 by rantingsfromunder

Well as the title says, I have now completed all the figures (and scenery) from the “Mantic Games” board game “Dungeon Saga”, and I have to admit this nearly broke me! Though I have only been at these for the last two months it seems like I been painting them forever! Anyway this does mean I have completed Azazels “Un’ited” challenge by finishing all the figure in a unit or game (go me!) and have “sort of” finished my last submission for “Zom’tober”, though I didn’t hit the one zombie a week target, I did do nine over the month, so I’m going to take that as a win too (please don’t point out my deficiencies here, as I might just break down in tears if you do!). Anyway all I had left to do this last week (or so, sorry) was complete the three “zombie trolls” 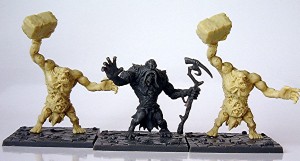 included in the game, and I was sadly lulled into a false sense of security by Keith of “Dead Dicks Tavern” fame*, as he had painted these figures up a few weeks ago and had appeared to have got beautiful results in under a week, so though I was a little daunted by the big trolls, I thought They shouldn’t be a problem to get done in a week (wrong!). Work is still conspiring to suck up all my time when I’m not sleeping, I apologize that I keep bleating on about this, I know nearly all of you have jobs too, but this is really starting to get me down (they nave obviously never heard the term “work life balance!”, and it looks like it will be like this till Christmas (and before anyone makes any jokes, no I do not work at the “North Pole” with a jolly fat man in red!). Still enough moaning, and on with the figures, “Hoggar” the “Zombie Troll Shaman” is a character figure and therefore had a character card detailing his special abilities, and I have printed the illustrated image of him next to the finished figures for comparison. All the figures were begun in my usual manner, with a spray coat of matt black.

Hoggar, I decided to begin the Shaman by tackling his flesh first, so trying to match the colour of the “official” picture I mixed some khaki and coffee on the figure by slapping both colours about here and then blending them into each other, then once dry I gave this a further dry-brushing with more coffee. Next I turned to the various wounds about his person painting them dark red, then adding some details here with

continental flesh mixed with some Polish crimson, and the odd bit of exposed bone with cream. Then taking my chocolate brown I added all the leather and wooden parts highlighting them in either leather brown or butternut respectively. Eyes and mouth (what there is of it) came next, black with white pupils for the eyes, and cream teeth on dark red gums taking care of these. His clothes I did in a mix of olive green and deep bronze green, with more olive green highlights (this is actually closer to the colour of the illustration than the photo appears). The rings on his harness and the edges of the covering at the top of his back I did with some chainmail, dry-brushed with rust, and the cover itself I did in deep bronze green with more of the same mixed with more olive green. The various skulls and the bone atop his staff was then painted coffee with cream highlights. He has some feathers hooked under the strapping on his arm, and these were added in navy blue with royal blue highlights. That just left me to add the various bits of “gore” around his wounds and hands in bright red (not on the original illustration, but hey what can I say I’m a sick puppy!).

Zombie trolls, the other two “trolls” are minor “bit part players” and so don’t have 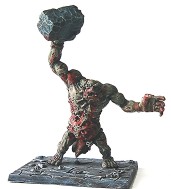 official colour schemes so I had free reign as to what colours I used, so beginning with their flesh once again I painted splodges of stone green, olive pale flesh, dark grey, and coffee (though not all of the colours went on both figures, but all did go on one or the other, if that makes sense). These were then blended into each other with the darker one then being dry-brushed with a coffee and stone green, and the lighter one with pale flesh. There wounds 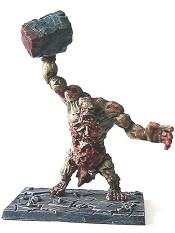 were added next as I did with Hoggar, as were their eyes and mouths. Their loincloths were then added in chocolate brown, with leather highlights, and where they were folded back at the waists I added the other side of the leather in khaki with coffee highlights. They too had the skulls hanging from their belts added in coffee and cream before they too were “gored up” with some bright red.

All three figures then had their flagstone bases dry-brushed in successive ever lighter layers of dark grey, light grey and white and then I added the various scattered bones these bigger bases feature in black dry-brushed with coffee and then cream. They were then given a coat of strong tone “Quickshade” and once that was dry I followed this up with a coat of Humbrol matt varnish. I’ll finish off with the obligatory photo of all the Dungeon Saga miniatures, including our somewhat outnumbered heroes. 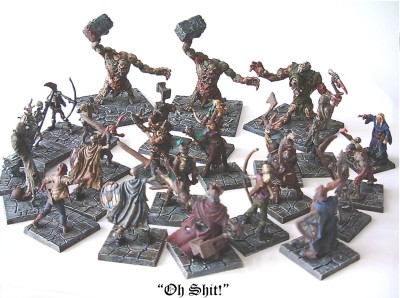 Next week see’s the start of November, or Mo’vember as we like to call it, where each week you have to complete at least one figure featuring facial hair of some description. Now I have got some figures put aside in preparation for this though given the somewhat irregularity to my postings at the moment, getting out a post every weekend seems a little ambitious, however I will be painting “Beardies” for the next month or so as I would like them finished before the end of the year, so we’ll see how I get on (or not) then.

So till next time, cheers Roger.

Leave a Reply to Mark A. Morin Cancel reply