“A Small Bone to Pick With You!” (Saga’tember)

Posted on October 2, 2018 by rantingsfromunder

Well as most of you are probably aware, Saga’tember has been and gone and I have failed miserably to complete anywhere near the amount of figures I’d hoped to, my co-conspirator Keith, of “Dead Dick Tavern fame (see link at the end of this post) rubbing salt into the wound by completing twenty three of the twenty six miniatures the game contains!! Anyway as I have stated before I have to finish all the miniatures for this game before Christmas, so as all the miniatures after these three are all Zombies (or have Zombies in there mix), I will be using them as my Zomtober entries, along with also taking part in Azazels “Unit-ed Challenge” (again see link at the end of this post), to complete a unit that is unfinished (these qualify I’ve checked). Now after my performance last month is it wise to take on not one but two challenges, probably not,

but what the hell, I’m getting used to failure now!

Anyway, this last week (or so) I have been working on the three undead Dwarves that the game contains, so I give you “Grund” and a couple of “Skeletal Stunties”….

“Grund” is yet another of the “Characters” from the game and as such I once again tried to follow the “official” colour scheme as set out on the “character card” (the picture from which is shown next to the painted figure, as always). All three were sprayed matt black, and then dry-brushed with chainmail over any “metal” bits, then in the same way as last time I touched up all the “boney bits” where the chainmail etc, had encroached and then added some patches of chocolate brown here and there before dry-brushing them with successive coats of coffee and cream. I added his cloak next, dark red was used as the undercoat here with ruby red used for the highlights.

Then the remnants of his robe were added with deep turquoise with green (a Tamiya colour) highlights. More chocolate brown was used on the shaft of his big hammer (oo’er misses!) and a dry brushing of butternut went over this, and on his boots, belt and gloves where it was also applied leather brown was used as the highlight. His crown and belt buckle came next bronze with copper highlights here, with the jewels added in metallic red and metallic green (I also added a couple of the green ones to the head of his hammer too, and the red to the glowing centres of his eyes). The wrapping in his hammer shaft was added in khaki and coffee, and lastly his beard was done in dark grey with mid-grey and cream dry-brushed over it. 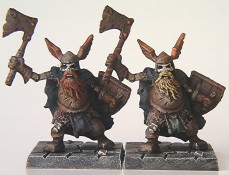 The two Dwarf skeletons (his retainers?), were begun in exactly the same way as Grund (no shock there!). Then one had his cloak painted royal blue, with mid blue highlights and the other dark grey with mid grey. Chocolate brown was used on the wood and leather bits, butternut or leather brown forming the highlights on these, details on the axe blades and the wings on their helmets were picked out using bronze and copper, as I did with Grund. I then turned to the fronts of their shields, dark red with pink burgundy highlights on the one and mid blue with light blue in the others, a couple of basic symbols added in black and then filled in with

cream and they would do. That just left their beards to add, chestnut with an orange highlight and dark sand with a light sand highlight on the other, and they were finished.

The figures then had their bases dry-brushed in successive ever lighter layers of dark grey, light grey and white over the flagstones and they were then given a coat of “Quickshade” strong tone. Once dry they were given a spray coat of matt varnish to dull then down (actually i8 think I went a bit heavy with the varnish as they are “very” matt and look almost dusty, luckily as they are supposedly the “dead arisen” I think I can get away with this, would have been rather pee’d off if they were more “animated and healthy figures though!!.

Till next time, cheers Roger.

25 Responses to “A Small Bone to Pick With You!” (Saga’tember)