Posted on September 1, 2018 by rantingsfromunder

OK so after my little “toe dipping” post of last week (it was not cheating Keith!!!), we are now officially underway with Saga’tember, where Keith of “Dead Dicks Tavern”

fame, Simon “Fantorical” Moore (see links at the end of this post) and myself are attempting to complete as many of the figures from the board game “Dungeon Saga”, by “Mantic Games” as possible in the month of September (Saga’tember, cleaver eh? OK suit yourselves!). So if this isn’t really your sort of thing I afraid you are going to be a little disappointed, as expect ghosts, skeletons, necromancers, and ogres over the next few weeks. But I thought I’d start with the stars of the show…the heroes.

Now I thought these were going to be the most labour intensive figures in the set, and looking at the pile of paint pots arrayed in front of me, I think I was right! I have to say 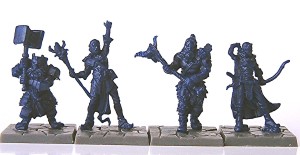 that painting to match an illustration is not really one of my strong points, I’m much happier letting my imagination pick the colours I slap on my figures (this is a nice way of saying I make it up as I go along!), but I’ve done my best to be faithful to the originals, and have posted the illustrations on the character cards next to the finished figures so you can see how well I did. Anyway first off the figures all went outside for a coat of matt black (no mucking about having to base these chaps (hooray!), and them the painting proceeded as follows…

Orlaf, so after his matt black was touched up with the brush, I began his painting with a dry-brushing of chainmail, then his belts, boots, axe shaft, the horns on his various skulls etc.. were all undercoated in chocolate brown before being highlighted with either leather, butternut or sand and butternut (on the horns), dependent on what they were. Now he appears to have feathers or something similar hanging down from either 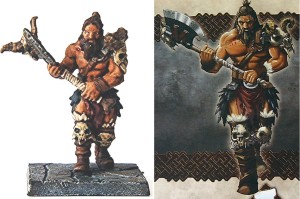 side of his belt, so as these are blue, I used navy blue with highlights of navy blue mixed with a little dark grey to add these, and the cloth he has hanging to cover his shame, front and back was done in dark red with highlights of pink burgundy. Onto his flesh next and as he has a much darker complexion than his companions I used my flesh tone seven (dark flesh) for the undercoat here, and the same mixed with a bit of European flesh for the highlights. My old pot of bleached bone came out for the skulls, and after a long wrestling session I finally managed to get then lid off and used this over a coffee undercoat on these. More coffee was used on the feathery things sticking out at his knees (?), this time with cream as the highlight, and his hair was a mix of chocolate brown and black with just chocolate brown for highlights. That just left the three red “slashes/tattoos” by his right shoulder, and I added these in terracotta red, though the “quickshade” appears to have virtually covered these up now!

Madriga, by comparison, her costume was pretty straightforward, begun as the above, she then had her boots, jerkin, and gloves painted in (wait for it…) chocolate brown with leather brown highlights (you didn’t see that coming now did you!), and her 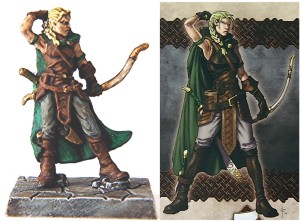 trousers were dark grey with mid grey highlights. Her green cape was begun with a coat of German field grey (this is definitely green though), and had a first highlight with the same mixed with some shamrock, and then a final light highlighting with some more shamrock on its own. Her bow was next and this along with the flights of her arrows was done in coffee and cream. Being a “pale and interesting” type of gal’ her flesh was painted with an undercoat of a mix of European flesh mixed with some pale flesh, and the highlights were the same but with the ratio of pale flesh increased. Her blonde hair was then added using light sand highlighted with some lemon yellow. The various gold accoutrement’s about her person were all done in shinning gold with a bit of bright gold for the highlights, and just to add a little variation the grips on her weapons were painted in scenic green (well I wouldn’t be using it on the bases for a change).

Rordin, was also begun in the same way as the above, however after his “all over” dry-brushing with chainmail I decided that this was too different from the illustration, so after a bit of head scratching I decided to mix some black, silver and chocolate brown to try and get the metallic brown of the artwork. Thankfully the result was pretty much spot on, so all of his armour and the inner part of his hammer’s head was painted with 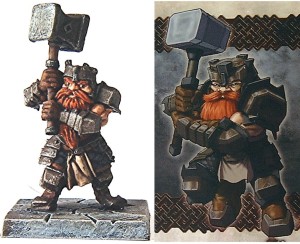 this before I added some more light chainmail dry-brushing over this. The details on his helm along with the facings of his hammer I left with the “over black” original dry-brushing. His leather gloves and boots were added next in chocolate brown and leather brown. For his flesh, European flesh was used as the undercoat with the same mixed with some pale flesh being used for the highlight. His quilted skirt was then painted with a mix of dark grey and black, with highlights applied to the “checks” in just dark grey. More dark grey was used as the undercoat for his trousers (you can’t see these from the front), with mid grey used to highlight here. The cloth he has hanging from his belt I undercoated in butternut and then highlighted with some coffee. Chestnut and orange were used as undercoat and highlight on his beard, and more chocolate brown was used on his hammer shaft with a butternut dry-brush finishing it off.

Danor, the magic user was slightly different to all the others as he didn’t need a chainmail dry-brushing as he has no weapons as such, so instead I painted his jacket in dark red, and then highlighted this with some ruby red. Then the top of his jacket and the long cloth hanging between his legs were undercoated with some royal purple before highlights of plum were painted over this. His belt, leggings and staff were then 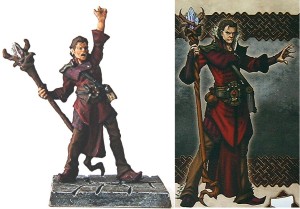 painted chocolate brown before highlights of leather brown with a touch of more chocolate brown were added to the first two, and butternut was dry-brushed over the latter. He has some “feathery things” (Can’t think of a better way to describe them sorry) at his neck and at the rear of his ankles so these were added next in coffee and cream. Like Rordin above his flesh was added in European flesh with the same plus a little pale flesh for the highlights. The crystals atop his staff came next these were painted lilac after which the edges of the stones were added in pale blue (sounds a little odd, and not how I would have done it, but this is how they appear in the illustration). It was at this point that I realized that I hadn’t added his shoes, so a little more ruby red, with highlights of pink burgundy took care of this oversight. I then added the inner part of his belt along with his spell book, in black with dark grey highlights, and the details on said belt along with his shoulder pad were done with a mix of silver and black. That just left the jewel on his belt that was metallic red, and the visible pages of his book that were more coffee and cream.

All four figures then had their flagstone bases dry-brushed in successive ever lighter layers of dark grey, light grey and white. Then the whole lot were given a coat of “Quickshade” strong tone, and once dry they had a final spray coat of matt varnish. Right well that’s a start made then, I think time is going to be short next week, so three figures that I hope will be quicker and easier to paint next.

Till next week, cheers Roger.