Posted on July 28, 2018 by rantingsfromunder

Well welcome back to “Cleavage Month” (and no that isn’t a real thing), I do however seem to have spent the majority of this month painting ladies with “their bits hanging out”, as my mother used to say. This I assure you is purely by coincidence, but it does raise the question, are we as figure collectors inherently sexist? Or is it the manufacturers who are to blame? As they say “sex sells, but who’s buying?”, Just something to ponder. Anyway on to this week’s figures, as I said I have one scantily clad Bar”bare”ian (sorry couldn’t resist), as I want to be able to field her in my Christmas “Dungeon Saga” game, and to make up the numbers for a decent weeks painting and keep it moving forward I’ve added in a couple “Scavvies” from my “Wasteland” project. All three figures are by sculpting virtuoso Mark Copplestone, so I

could have called this post “Mark Three”, but I went more cryptic than that, so the title of this post of course refers to the coins I base my figures on (and not a cockney rhyming slang reference, you and your dirty minds, honestly I despair!).

So after they were based on said coins they went outside for a coat of matt black, and it was at this point that I realized I hadn’t taken a photo of the unpainted miniatures and that is why the photo above is so…well black (sorry). Anyway then the painting could begin!

My Barbarian princess (well she is wearing a lot of gold) was begun in the usual way with all the bits that would end up silver being dry-brushed with some chainmail, then her boots, belt and the back of her shield were painted in chocolate brown before the boots and belt were highlighted with leather brown and the shield with butternut. Her halter top was then added in leather brown highlighted with khaki. Her fur pelts and boot accoutrements were undercoated in dark grey then highlighted with subsequent 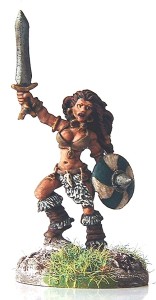 coats of mid grey and white. All her various pieces of jewelry were then undercoated in bronze before highlights of shinning gold were added over this and the stones themselves were dotted in using metallic blue. Turning to her fleshy bits next a base of flesh tone seven (dark flesh) was applied first and after her eyes and mouth were added this was highlighted with European flesh. Deep turquoise is a new colour I picked up the other day so I thought I’d give it a try on her shield, now I thought I’d try and paint a snake running around the face of her shield, but I made a right hash of this and it quite frankly looked awful! So after another coat of deep turquoise I added the “swooping” cross in coffee and cream (adding the skull on her belt in the same at the same time) and highlighted the deep turquoise segments in the same mixed with a little aquamarine, much better! Lastly I turned to the vast quantity of flowing hair she has, so after mixing some chocolate brown with a little black and using this as an undercoat I highlighted with chestnut, a couple of gold beads in her hair and she was finished.

Goggles, my unimaginatively named “Scavvy”, was begun with a dry-brush was chainmail too, and this was also followed up with chocolate brown and leather brown on his various leathery areas. His top jacket (he appears to have two on) was then 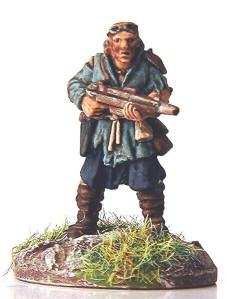 added in a mix of dark grey and blue grey and this was then highlighted in just blue grey. The second “under coat” was then added in navy blue with royal blue highlights. His rope belt, pouch and his trousers (what you can see of them) were then done in coffee and cream. The grips on his guns came next chocolate brown with butternut highlights taking care of these, and his holster was repainted black and given highlights of dark grey. European flesh was painted over of all the exposed flesh areas and after his eyes were added more of the same mixed with some pale flesh was used to highlight, I did notice that the figure has what looks like a scar on his right cheek (radiation burn?) so I used a bit of dark red and pink burgundy to add this. He has a bedroll slung at his back as well so I added this in olive green with stone green highlights, that just left his earring and necklace to add and a touch of copper took care of this.

Wilf Grimshaw, my final “Scavvy” of the week is named after… well points to anyone 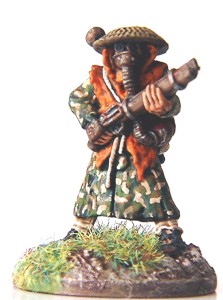 who can remember who he’s named after, and why he has fallen so far out of favor! Anyhoo, Wilf was begun as were the above, but then I turned my attention to his over(under?)coat so after a coat of deep bronze green, squiggles of olive, khaki and coffee were painted over this to form the camouflage pattern. Then in a fit of silliness I thought it would be a good idea to have him wearing the remnants of a bright orange “cagoule” (remember these from when we were kids!), so after this painting orange I mixed more orange with some citrus orange and highlighted with this. His belt and the bottoms of his trousers were then added in coffee and cream, before his shoes were repainted in black and highlighted with some dark grey. The tiny bits of flesh exposed about his person were added as above, and his rucksack and pouches were added in my two shades of sand (dark with light highlights). Finally his hat was added in chocolate brown with successive dry-brushes of khaki and coffee.

All three figures were of course then given a coat of Quickshade strong tone, before having their bases finished in my own inimitable fashion, and a coat of spray matt varnish dulled down the sheen on them. So there you are, still a bit late, but at least it’s still Saturday this time, so I am catching up. Three really nice figures this week, from one of my favorite sculptors, the barbarian is a cracking figure (with a cracking figure, if you’ll pardon the pun), and “Wilf” is one of those figures I’ve always really liked but never got around to buying first time round (when I was buying these figures from Grenadier back in the eighties), so it’s great to finally have him painted and in my collection.

Lastly before I sign off this week just a quick mention that Dave Stone of “Wargames Terrain Workshop” is trying to organize a “Bloggers Meet Up”, I hope to be able to attend myself, but please go and check out more and perhaps offer to attend here…

So till next time, Cheers Roger.