Posted on April 14, 2018 by rantingsfromunder

“Barman, a drink and some information”.

“Sure, but neither is free”.

After pushing some coin across the bar, “I’m heading into the badlands and need a guide, I was told this was the place to find one”.

“Frankie’s the best guide there is around here, and the only one crazy enough to go into the badlands!”

Well while everyone else seems to be heading to Salute this weekend, little Cinderella here has been left at home toiling away at the figures I already own, and this week I thought I’d finally get some paint on a couple of the major heroes from my

disgraced hero of Salvation City, now tasked with recovering a very important “item” lost deep in the badlands and in the possession of some very bad people. And smart talking “scavenger” and guide extraordinaire “Frankie”. (It is worth noting that these two are the characters behind the most of the quotes from the previous posts). So after pulling two more figures from my “Moonraker Miniatures” collection, (strangely they are both armed with the same rifle, maybe Slater gave it to her as part payment for her services?) they were based up in my usual fashion before being given a coat of matt black and their trek across my painting table could begin (a trek a lot less hazardous than one into the badlands I hope!).

Slater, was begun in my usual way with a dry-brushing of chainmail over any metallic bits (shoulder pad and weapons), then I gave his trousers a coat of butternut and highlighted them with some khaki. His shirt was then painted coffee with cream forming the highlights here, I couldn’t decide if he had another shirt/jacket just visible under his coat or if it was just a ripple in his shirt, I decided on the former, so this and

the pieces visible through holes in his coat were then added in chocolate brown with leather highlights. Turning to his flesh next, I mixed some European flesh with my flesh tone seven (dark flesh) and painted all the exposed areas with this, then after his eyes were added use more European flesh this time with a touch of pale flesh to highlight here. Scarf next, dark red with a pink burgundy highlight taking care of this, and light grey and a mix of the same with a little white for the highlight doing the same for the ones around his waist and knee. His hair was then added in more chocolate brown with chocolate brown mixed with some earth brown taking care of the highlights here. Finally I added highlights of dark grey to his coat, boots and knee pad, done.

Frankie, was also begun with a dry-brushing of chainmail, then I set to work on her dress (or what remains of it) with a coat of blue grey forming the base and highlights of porcelain blue over this, chocolate brown was then applied to some of her various 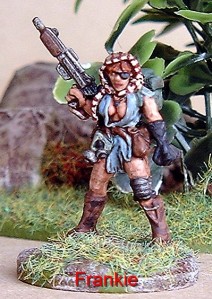 leather pieces and the grip on her rifle with leather (funnily enough) used to highlight the leather and butternut the rifle grip. Her backpack and gas mask were then undercoated in deep bronze green with the same mixed with scenic green to form the highlights on the backpack, and mixed with stone green on the gas mask. Though you can’t see it in the picture scenic green was also used as the base on her water bottle case, with earth brown and light grey “splodges” completing the camouflage pattern here. Flesh next and as with Slater above European flesh mixed with flesh tone seven was used as the base here, and European flesh on its own formed the highlights, though she of course also got a little pink burgundy added to her lips. Her “yasser scarf” came next, coffee and cream covering this with dark red stripes painted over this. Hair next and as these two figures reminded me of two main characters from the movie “Spacehunter, Adventures in the forbidden zone!” I had to go with chestnut highlighted with orange for the hair, ala’ Molly Ringwald. That just left the jewel hanging around her neck to be touched in with some metallic blue, and some dark grey highlights on her glove and she too was finished.

Both figures were then given a coat of “Quickshade” strong tone and once this was dry their bases were painted as usualwith chocolate brown, that was then given successive dry-brushes of khaki and coffee on top of this. Then areas were picked out with some scenic green and then these same areas were flocked using “Javis” Summer Mix static hairy grass. A final spray coat of matt varnish sealed everything.

Strangely (and completely by accident I assure you) if you look at the picture of the painted figure “0039 Female Scavenger”, or “Frankie” as I call her, on Moonraker’s site I have painted mine in remarkably similar colours, subconsciously I must have had that image in my head, weird though.

Anyway as promised (admittedly it was back in August of last year!) I have now got some of my “star” characters finished. So till next time, cheers Roger.

This entry was posted in 28mm sci-fi, Into the Wasteland, sci-fi and tagged 28mm sci-fi, Post apocalypse, sci-fi. Bookmark the permalink.