Posted on June 4, 2017 by rantingsfromunder

Ok well as promised I have now begun the process of building up the necessary additions needed to turn my “Daytona Beach iron pumpers” into fully fledged members of Eternian society. Sadly by “sods law” this first full week sculpting would also have to a week when I’m working the night shift, so it seems like it has been every other day that I have been able to get any “hobby time” in, but at least I was able to make a decent start to process.

Sunday, and I began in much the same way as I always do on my He-man replica’s by adding the “furry” undies that are so in “vogue” on Eternia, these were simply a couple of blobs of putty plopped onto their bums and crotches and then smoothed around to shape, then taking my small knife I simply “tapped” in the fur effect. The fronts of

the “pants” deliberately had a curve added to the top of the front, as this is where their wide belts will sit. Then turning to Beast-man, I noticed that the original toy figure had fur on him lower legs and forearms. His arms I’ll leave till later, but his legs I thought I’d add now, so more “balls” of putty were pushed onto his shins and then teased around to the sides, leaving his actual shins relatively clear, the once I was happy with the positioning of the putty, I tapped in the fur as with the pants.

Monday, I went straight to work adding Jitsu’s boots, these were just blobs of putty smeared over his feet and lower legs and then shaped to suit. I also added Beast-man’s belt, this was just a sausage of putty tapered at both ends that was run around his waist and then flatted

with one of my colour shapers, I added a couple of tiny flatted balls of putty to the front to add a little detail, and then cut a “V” into the top of it, this is where his furry breast-plate will sit. Lastly with the small amount of “Greenstuff” I had left I added a couple of wristbands in similar (but obviously, small) fashion to his belt.

Wednesday, I’m rather pleased with myself today, I had been putting off adding Beast-man’s breastplate, but decided it was going to have to be done so mixed op a bit of the old “greenstuff” and running a sausage around his neck started by flattening out and smoothing the ends where they meet at the front, then I added the “round blue bit” (sorry don’t know what else to call this), to do this I took an old ball point re-fill and using the open end of this pushed it into the putty to form a

circle, then taking my small knife I began adding the fur in an outward petal pattern around this, before continuing up over his shoulders and around the back of his neck. Turning the ball point refill around I then added eight dimples around his neck, before tiny conical ball of putty were pushed into these to form the spikes around his collar. All in all this came out better than I had ever hoped, I just hope I’ve left enough room to do the work on his face, I really don’t want to have to remove this!

Friday, well today it was time to bite the bullet, and add the facial modifications to Beast-man, I have to admit that I have been dreading this since I started this figure, now looking at him I couldn’t help but wonder if I wouldn’t have been better off doing this before I added “breastplate thingy”. But the die was cast and it was time to get on with it. I began by adding a blob of putty to the top of his head and roughly smoothing this a slightly domed shape then pushed in the ridge that runs over the crown of his head, this was then dragged down to the bridge of his nose and over his eyebrows to make then thicker. Once I was happy with this I took to tiny balls of putty and popped them onto the sides of his head, shaping them into pointed “Mr Spock” style ears. His mouth was pretty much right on the original figure (I’ll try and paint in his pointed teeth), but he needed a beard adding, so a sausage

of putty was run around his chin and my small knife was used yet again to drag in the hair. I have to say I’m pretty happy with the result and that it’s come out better than I had hoped. As Jitsu was lagging behind a bit now I thought I’d better add his belt, this was done in the same was as Beast-mans, and the furry tops to his boots were just a couple more sausages run around the top of each boot with the fur tapped in with my knife again. 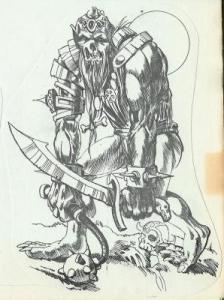 Beast-man at least), I think I’m on target to finish on time. I leave you with a fun fact, In the early concept drawing for the He-man range Beast-man and Skeletor were actually one character, it wasn’t until later in development that they were re-worked as two different characters. Please be sure to check out all the other entrants work on the “Forgotten heroes” web-site.

That makes an even twelve of us cutting, painting and converting this year, Jez has got a lot to answer for!

Till next week Excelsior, Roger.

8 Responses to “Release the Beast!”