“When you can’t see the wood…”

Posted on August 14, 2016 by rantingsfromunder

Scenery month week two (the crates didn’t count as they were done in July, Doh!), and this week I thought I’d kill two birds with one stone by a) adding some more bases of scenery too the four I made many moons ago before this blog was conceived, for use in numerous Sci/Fi and fantasy settings from primeval, alien jungles to Edgar Rice Burroughs subterranean lands, and b) it would give me the chance to use up some of the fifty (yes fifty!) palm trees I picked up for a tenner at Salute this year.

First job was to cut out some bases in MDF, so six “ovals” ranging from about 120mm up to 200mm were cut and the edges sanded and beveled down, to reduce the 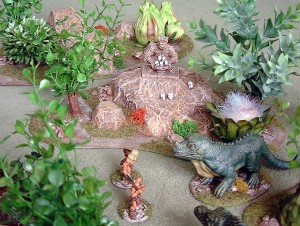 thickness of the edges. Next it was up to the loft to retrieve the big bag of “plants” I had up there from when I built the last lot (see in the photo right). Some of these are fish tank plants, these came as a sheet that I have cut up into sections to use as individual trees. Then there are the aforementioned palm trees, these were mounted in groups of two and three’s onto plywood disks with the plastic “lugs” on their bases glued though the base. The rest of them are imitation flowers and came from my local florists supply warehouse. These

are great for this type of thing most were about 14inches long to begin with, but it’s just the “heads” that I was interested in (just don’t ask me to name them, I know the lilac fluffy one’s were thistles, but that’s about it), some have been taped together with masking tape then superglue was dripped around the tape to secure it, and the excess wire bent outward or around to from a cross or “ring” to hold them upright, There are also some artificial

“Raspberry’s”, trust me once the stalks are removed and they are glue down upside-down they look nothing like what they actually are.

Anyway next I messed about trying the various plants on the bases till I was happy with the positioning, I then marked which plant would go where with different coloured marker pens. Gluing down the taller “trees” was next, different ones needing

different techniques to secure them, the palm trees and fish tank plants were fixed with PVA (white glue), the smaller bushes and tree with superglue and the taller cut down wire trees needed a blob of greenstuff to hold them in place. The other “seed pod” type ones will be added after the bases are textured.

If you look at the original four bases I did before you can see that they all have large “rocky outcrops” on them, now my original plan (up to this point) was not to have any of those on these bases, but looking at them again I decided I would have to add some small outcrops to tie them in with each other. The way I created these is virtually the same as the middles of the Dystopian wars islands I made last year…

cutting some vaguely rocky shapes these were glued down onto the bases, then taking my big bag of tissue paper (I really don’t throw anything away!), I mixed up some water, PVA glue and a little filler in a dish. Next pulling out a rather shiny piece of the paper (with merry Christmas all over it) ripped it into small (40mm or so across) irregular pieces, it’s important to not cut these with scissors or use the straight edges as torn edges blend in better hiding where one piece joins another. These were pasted on using a brush and the mix

I made up before, you do of course get overlaps around the edges and corners but that is okay as I’ll hide them with the second coat. Talking of which, once this was dry I repeated the process, this time with some thin un-shiny tissue paper. This coat has to be more carefully worked out as you have to firstly completely cover the piece, then taking smaller pieces recover all the folds and edges. You should find that the small ridges a creases that are formed naturally while doing this will look like relief patterns in the rocks surface and paint up really nicely with a couple of dry-brushes. A tip is that it’s a lot easier to do these before you add your bits of “foliage” (advice I should had taken at the beginning!!). Next I “Tetrioned” (that’s spread filler to the uninitiated) over the bases, this was a little awkward around all the trees and such but we got there in the end, I left the areas where the “seed pod” type

plants will go bare for the minute as I have a plan for these. Then I painted chocolate brown over all the areas on the bases that had not been left clear, along with the “trunks” of the trees that had been wrapped with tape. Once this was dry, I Tetrioned over the bare areas and while this was still wet, painted these areas with the chocolate brown. Then again while still wet I put superglue onto the bottoms of the seed pod pieces and set then in place and left this all to dry overnight. 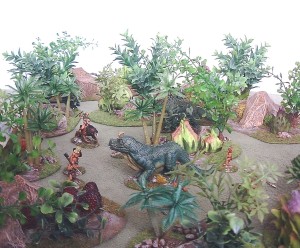 repainted with scenic green and then after I’d glued down some clumps of rubberized moss, the green painted areas were slapped with PVA and sprinkled with some hairy flock, and they were done.

Sorry for being a little late with my posting this week, but these have taken a bit longer than I expected, but I should now hopefully have enough to cover a 4ft by 4ft table, I can see however that I will need to make some more of these at some point in the future.

Till next time, Cheers Roger.