Posted on April 8, 2016 by rantingsfromunder

A few weeks back I ordered a “Controller” figure from the “Heroclix” range too use as the basis for my “Ram-man” conversion, and at the time I mentioned that along with him I had also ordered some other figures as well (well they were posting to me anyway and it would be rude to just get the one wouldn’t it!), the majority of the rest of that order consisted of the “Shield agents” shown below, a vague plan had formed in my mind as I perused the “Blue Rat games” website, I thought I could make them into a team of adventurers that travel from 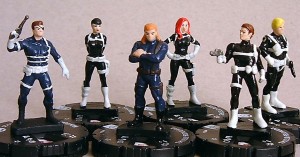 planet to planet via some form of interplanetary “portal” a bit like a cross between “Stargate” and “Sliders”. As for the form this “portal” will take I wasn’t sure, possibly a large standing stone or something like that, but I’d worry about that later. I thought this would allow me to use them in a variety of setting and genres (This week Dinosaurs next week Nazi Germans or Zombies etc…).

Now before I begin with the painting I have to say that I’m a little disappointed in the actual figures themselves as they are bigger than the older Heroklix sculpts at over 35mm (This is a problem I’ve heard a few people on the net complain about), and secondly the detail on them is rather soft and poorly defined. This means they tower over my other figures and if I can live with the disparity in size we’ll have to wait and see, but for now I decided to go ahead and paint them.

So after they were broken away from their “Klicky” bases (this was a right pain in itself, another advantage the older figures have!!) they were glued straight onto tuppence’s with no card “spacers” (They are tall enough already), and then the area around there feet was blended into the edges of the coins with some “Teterion all purpose filler”. An undercoat of matt black came next which all but obscured all the detail of where their packs and strapping was, (luckily they came with game cards that allowed me to see where it should be on the figures). I decided that some sort of camouflage pattern would tie them all together as a group, but what colours to use? I didn’t want green as it seemed a bit obvious, and grey….hmmm, in the end I went for a take on the desert camo, popular in films and TV at the moment and so laid down a base coat (well two coats actually) of khaki and then added splodges of chocolate brown all over their one piece cat suits, after this I added more “finer” spidery splodges of coffee over the top of this. Their boots, belts and gloves came next, these were undercoated in black and then highlighted in dark grey. When it came to doing the details I tried to add a little bit of individuality to the different characters of my team, so from here I’ll cover each figure individually, the name in brackets is the “Heroklix” original name.

Major Frank Storfield (Nick Fury): the detail on the face of this figure was so soft you couldn’t really see where his eye patch was so I decided to forgo that and just paint up my “grizzled” military leader of the team with two good eyes. His flesh was under coated with Red Indian Flesh that was highlighted with European flesh, and his hair was chocolate

brown highlighted with chestnut brown with a couple of dark grey/light grey highlights at the sides.

Mariko Wannafubi (Maria Hill): The short hairstyle of this figure I felt made her perfect fodder for the Japanese scientific expert of the team, so after a base of European flesh mixed with khaki was applied to her flesh it was highlighted with European flesh mixed with a little pale flesh. Her hair (along with the next two fig’s) was painted black and then highlighted with a mix of dark grey and black.

Joe Running Bear (Shield Bodyguard): Every team should have a Native American tracker in it, and as the long hair this fellow had looked conducive to this that’s what he became. His flesh was first

undercoated in a mix of chocolate brown and Red Indian Flesh, and then highlighted in just the Indian flesh tone.

Lucian StClair (Shield Field Agent): Now the pose on this figure was a little odd as he seems to be leaning back in a rather strange manner, so I sanded his base on an angle to try and straighten him up as much as possible (still looks a bit awkward to me). I decided in the end to go with the “laid back” feel of this chap by making him a Jamaican, this meant adding an “Afro” style hair style with a little greenstuff and giving him the dark skin if his countries native inhabitants, this began by laying down a base coat of chocolate brown and then after his eyes were added highlighting this with earth brown.

Grant “Pockets” Naylor (Shield Infiltrator): The British member of my team had his face painted with European flesh then highlighted with a

mix of the same and pale flesh. His hair was painted with sand and then highlighted with lemon yellow.

Heidi Klopp (Shield Elite Agent): Finally the flamboyant German lady was painted facially with the same colours as above, but inspired by the bright red tresses of the original figure I decided to give her bright pink hair so an undercoat of Pink Burgundy was applied and them Polish Crimson was used as a highlight for this, I’m not sure how the major would feel about this as an accompaniment to her camouflaged bodysuit, but every team needs a rebel doesn’t it.

So there you go, in some ways I’m quite pleased with the idea I’ve had as a background to these figures, but I’m rather less impressed with the figures themselves, whether this project will ever see any tabletop time I don’t know as I’m just not sure I can live with the disparity in size between these and a lot of my other figures. Maybe I’ll keep an eye out for replacements for these fig’s and resurrect the concept at some point. Or maybe I learn to live with the figures I’ve got, I just don’t know at the moment.

Anyway till next week, cheers Roger.

This entry was posted in 28mm sci-fi and tagged 28mm sci-fi. Bookmark the permalink.