Posted on January 8, 2016 by rantingsfromunder

OK new year and new year resolutions, first off try and clear some of the unpainted lead mountain (who amongst us hasn’t got this as one of their resolutions eh!), secondly to (if not) finish my VBCW fig’s then at least get a fair chunk of them done, thirdly not to buy any more figures until at least April (not sure I’ll keep to this but it’s the thought that counts).

Anyway in the spirit of the above, I’ve decided to make January a “Roll of the Die” month, now as it’s been a while since I’ve done one of these I thought I’d better go back through the rules. Well basically there are three lists of figures “Lancelot, Galahad and Merlin” (humor me OK!), and these relate to the results of the tossing of two coins (2x heads= Lancelot, 2x tails= Galahad and head/tail = Merlin), after this I then roll either a D30 or D20 (Merlin only has twenty boxes whereas the other two have thirty), and then I paint up whatever figures are written in that box, some boxes only have one figure in so in this case I roll again and add the contents of this second box to that week’s painting, boxes that have already been done and crossed off are re-rolled (though some boxes contain more than one weeks painting and so stay un-crossed off till all the figures in that box are completed. Got it? (Yes), overly complicated (Probably).

Right so off we go, first toss of the coins gave me a head and a tail so out came Merlin’s list (this list is all VBCW) and then I rolled the old D20 and got eleven, so this equated to….

Well, as you can no doubt see three of the figures in question are exactly the same and the standard bearer chappie I’ve done before, so to add a little variation I sanded away the top of two of the bowler hats and the top of the “standards” head and digging out the greenstuff added two caps and a top hat to the figures, I also added the cross piece to the top of the “flag” pole with a cut down bit of cocktail stick. Then after basing and black undercoating, I began the painting by dry-brushing the guns with some chainmail, and then undercoated the flagpole, gun butts, bowler

and caps in chocolate brown. Then I mixed a little black into my royal blue, and painted the suit and trousers on a couple of the figures in this before highlighting them in just royal blue, then did basically the same on the other two using dark grey and light grey. Then the chap in the top hat, had his hat and jacket highlighted with some dark grey (I can see him as an undertaker, for some reason), and then I

painted in all the shirts in coffee highlighted with cream. Flesh next, European was used as the base here and after the eyes were added, I highlighted them in the same mixed with a little pale flesh. I then realized that I hadn’t added the highlights to their boots, so out came the leather brown and dark grey to put this too rights. Hair came next

Now those of you who have been with me for a while may remember that I painted the banner on the last of my “standard bearers”, with a fist with the word “Unite” written across it, and indeed I had intended to paint the one this week from scratch as well, but while trawling the net for some inspiration I came upon this banner for the “waterside 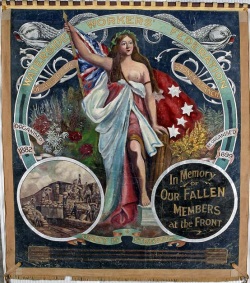 workers federation”, and was immediately struck by the sheer beauty and work that had gone into it, and realized that there was no way on earth I could recreate it myself, so I have to admit I’ve cheated and printed it out to size and them re-painted over the top of it (a bit like painting by numbers) I’m rather pleased with the result, Then I painted the boarder and back, in butternut, and highlighted this in coffee, before cutting a diagonal line across the back piece so I could hook it around the pole, once glued in place with PVA

I added the ripples to the flag,(these will stay in place once the glue sets), and used a little superglue to fix in to the back of his hand for extra security. I then touched up where the two edges of the slice met at the back of the flag before all four of the figures were given a coat of Quickshade strong tone, and based in my usual fashion. Lastly they had a final “blow over” with the matt varnish. So there you go that’s the first figures of the year painted and though they are probably not the most exciting subjects I hope to do this year, it’s good to be back in the saddle as it were, and off and running.

This entry was posted in A very British civil war and tagged VBCW. Bookmark the permalink.