Posted on July 5, 2015 by rantingsfromunder

Right well before I start properly posting my progress next Saturday (I hope), I thought I’d give you a little background on my thinking and reasons for “He-month”. As I’m sure most of you are aware “He-man and the Masters of the Universe”, was unleashed on an unsuspecting world of children way back in 1982, and I can still vividly remember first seeing them piled in a stillage in a toy shop in Chester, and badgering my poor mother all afternoon until she agreed to buy me one. But which one to get! You must bear in mind that this was before the twenty minute adverts (sorry cartoon series) had even begun, so I had very little information as to who was who, and this was the cause of my somewhat strange choice of “Zodac” (probably the most useless character in the whole first wave of releases!), but he had a laser gun you see, and as a child of the Star Wars figure revolution that was all I needed to see. Anyway this poor choice was what probably put me off buying into the franchise big time, and my purchases began and ended there (much to my parents relief I’m sure), I was however an avid watcher of the television series, especially “Teela” (well I was thirteen at the time). I also went to the pictures to see the woeful movie version (sadly this is still Dolph Lungrens finest hour), and watched the re-make animated series with my children when it was on. So though I’ve always quite liked the concept, I’ve never been what you’d call a real “fanboy”. So what you ask has prompted all this then? Well though I’ve been having quite a lot of fun lately painting up Zombies, VBCW, Dystopian Ships and the like, I’ve been itching to get out the old sculpting tools and slap some greenstuff about again, and so a suitable subject was required (at this point long term readers will be saying “what about the Sci/Fi cowboys!!”. And yes, I will finish them one day). Recently the series “Toy hunter” has been repeated on “Sky” and this started to get me thinking, but it was Myles pointing me in the direction of the “He-man” skit’ clips from the “Robot Chicken” series on “Youtube” that really got me serious about converting some 28mm figures into the “muscle bound” heroes and villains of my televisual youth.

Much pondering ensued as to where I was going to lay my hands on some suitably muscular figures to form the basis for both He-man and Skeletor, various sources were considered and discarded, including “Copplestones” Cavemen (too much hair) and “Heroklix” (I’ve got lots to choose from but nothing really stood out), then I remembered I’d seen some rather nice muscular chaps posing as “John Carter” types 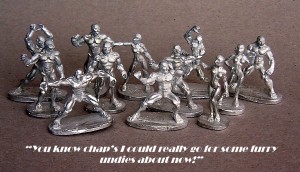 on the TMP a while back, and even more incredible I could actually remember the companies name! So it was off to “Bronze Age Miniatures” website for a look. Brilliant just what I was after! They even did unclothed “Dollies” that would save me hours of time filing off unwanted clothing, the down side of this was that there were so many useful poses in the range that rather than just the two for He-man and Skeletor I ended up ordering enough to populate a whole episode of “MotU”, this cheap little diversion was fast growing faster than “Cringer” into “Battlecat!”

Having mentioned this idea in a reply to a weekly “Ranting’s” post Jez over at “Carrion Crows Buffet” blog mentioned that he might have a couple of figures that would fit my bill (there are just so many fine chaps blogging out there!), much appreciated as this was, I had to inform him that I was now sorted figure wise, and to my immense pleasure he decided to jump aboard my little boat to insanity and is going to paint them up as Eternia’s favorite sons himself! Well with two of us participating we just had to give it a name, sadly I didn’t start this last month as Jez came up with the quite brilliant “Masters of the Juniverse”, but as it is now July we finally settled on “He-Month”. He has also posted his first “He-month” post, and you can check it out here….

As you can see above the figures have now arrived (it looks like the Eternia nudist society outing up there doesn’t it!), and I’ve picked out the first two pieces of “conversion fodder”. You can probably guess who’s going to be He-man and who’s Skeletor (if not the second picture is a real giveaway!). As you can see I started by hacking away the bits I don’t need, and filing away the

feet ready for the boots to be added with greenstuff, the eagle eyed amongst you will no doubt have noticed that He-man will be holding his sword aloft with two hands not one, well in my version that’s how he does it so there! (alright, I should have checked before I ordered the figure, but it’s done now).

So like the series I plan to end each week with a morale, so….

“In today’s story Roger learnt that he should have a proper look at the poses famous characters take when performing important feats, instead of relying on his fading memory”.

4 Responses to “I Have the Figures!!”