Posted on February 16, 2015 by rantingsfromunder

Right first off apologies for the severe lateness of this weeks posting I knew that last week was going to be busy but the “real world” really bit into my painting time with a vengeance in the end, with trips to both my youngest schools (current and potential next one) along with overtime at work a bad back and a concert to go to, I realised by Wednesday that I wasn’t going to get this weeks figures painted in time. Anyway going back to that fateful Saturday last week I tossed the coins and got double heads, so the D30 was rolled on Lancelot’s list and came up 5 (yet again, third week on the run, can you believe it!!), which equated to…

So my first choice was, a “Vampirella” figure from GZG, as I thought she would be quite quick to paint up (lots of flesh!) so after being based up as per-usual and given a coat of matt black I painted on her costume in dark red and highlighted this with bright red , though not “comically” correct I also gave her red boots and wrist bands, I then added her collar and boot tops in coffee and cream, next I carefully added her flesh (not carefully enough as it turned out!!) this was European flesh highlighted with a mix of continental flesh and pale flesh her eyes and mouth/teeth were added between these coats (the black of her mouth smearing so badly that she looked to have a Hitler style moustache at one point) after this I lined in round her eyes with plum and did her lips in pink burgundy. Then it was time to try and tidy up the flesh around her costume and face (as I’d rushed it the first time and made a right mess of it (more haste less speed as they say!). And that as you can see below is pretty much were I’m up to at the moment on her so on to the next figure.

This little “Celtos” wench is by Kev White and originally came with a pair of wings, but just like Paul McCartney she has parted company with them at some point and they are now

residing in that big hidden receptacle of missing figure parts somewhere in my house (I wish I knew where it was as there must be loads of cools bits there now!). Anyway suffice to say that I gave her a shield from my spare shield collection to cover the “lug” on her back and again after “basing and blacking” I began her painting with a dry-brushing of chain-mail on her helmet sword blade and shield, then her golden bits of armour and helmet wings were added with “GW” shinning gold highlighted with gold. Her “thong” knickers were then added in coffee and cream and the face of her shield was done in the same colours ready for its design to be added. Her flesh and face was added as above and chocolate brown was applied to her boots and sword hilt and again that’s where I am with her at the moment.

Lastly I picked a goblin that I think I got from “Stronghold Miniatures” as a sample a long while ago but I could be wrong. At some point the end of his spear had broken off so first job was to carefully drill a hole in his fist and with a little glue and “greenstuff” re-attach it. Then after the normal preparation I dry-brushed chain-mail over the tip of his spear, and then painted his shoes spear shaft, cape and loin cloth in chocolate brown before highlighting everything but the spear with leather brown, then his flesh was undercoated with deep bronze green and after his eyes were added this was highlighted with goblin green (the old GW colour, yes I still have this), next his cape has a kind of fur over piece, so this was under coated dark grey (I’ve yet to highlight this) and the strapping on his spear and round his wrists I painted coffee, and that’s where I’ve reached with him.

So the plan is for me to finish the three figures above by next weekend, but as this shouldn’t be too much of challenge (famous last words!!) I’ve decided to also have a go starting the two figures here as well. The “Hitlerbot” is from “Copplestone Castings” and 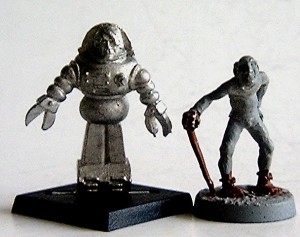 was bought for Myles in a pack of three villains, but he’s decided that he only wants one from the pack so I’ve inherited the other two. The old chap is a sample I received from “Hasslefree” long, long ago and as you can see I even started painting him up once, but my fickle interest soon waned and that’s as far as he got, but with a little “greenstuff” I now have big(ish) plans for him, but that’s all I’m going to say on this at the moment, except that I hope to have all the “mod’s” done and have him and Adolf based up and undercoated by the weekend. We’ll see about though won’t we?