Posted on November 14, 2014 by rantingsfromunder 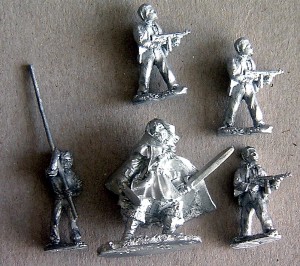 paint on a figure I bought a while ago just because I liked him. The “Ranger” figure came from Bob Olley’s excellent “Olleys Armies” range that we used to sell at shows (a bad idea really as I think I bought as many of them as we sold, not the most profitable marketing strategy!), and as I couldn’t possibly present you with just one figure for my weekly workload I had a “roll of the die” as well and from “Merlin’s” table pulled out box sixteen (3x civilian submachine gunners and 1x standard bearer).

Taking my Mo’vember entry first he’s a big lad and doesn’t really match any of my other fantasy figures, so I doubt he’ll see a lot of “table time” but I just like him as a display

piece. After looking at his metal base I decided to measure it against a two pence piece and discovered that his feet fell just inside of the edge of the coin, so I cut away the side edges of his base before gluing it to said coin and filling around the edges with “Tetrion”. Next a coat of matt black was applied and from there the painting could begin in earnest. In a change to my usual painting order all the different parts of him were painted with flat colour and once he was fully covered I then went back and highlighted each area with a lighter version of the base colour.  So after the metal areas were dry-brushed in chain mail, deep bronze green was painted onto his jupon, his sleeves were done in coffee, his boots, belts, horn and trousers were chocolate brown, copper was used as a base for his sword hilts broach and horn tips, his boot tops were dark grey, his hair was sand, dark flesh was applied to his face and hands and his cape (as I liked it so much on Doc Damocles’ last week) was German field blue. Then it was just a case of going round again with a lighter version of all the above and highlighting (the exceptions being his horn that was highlighted in coffee then cream, and the copper bits were highlighted with shinning gold). He was then given a coat of “Quickshade” and based in my usual manner.

pole, then after basing them on two pence pieces they too were strayed matt black. Now the standard bearer was pretty simple to paint as a figure, just coffee and cream for his shirt, dark grey/light grey for his pants, flesh and hair (he even has a moustache I noticed during painting!), but his flag took a bit more effort. After some time spent trawling the net looking at pictures of trade union banners, I decided on something simple (some of them are works of art in their own right!) and a fist with “unite” across it seemed appropriate, this was sketched out in pencil on one side of the banner, I make my banners from paper and do them double length with the “loops” marked and cut out in the middle, then the background colour was added all over the back and around the pencil image on the front. Next I painted in the fist and yellow diagonal stripe, these were then highlighted, and finally I added the words and edged it in yellow. Now before I could attach it to the pole I had to cut a slot on the back so it could fit round the pole, then PVA glue was smeared between the back and front and after it was slotted into place waves and ripples could be bent into the banner as if the wind had caught it. Once dry I touched up the edges and cut out in the back. He was then finished as below.

After the basecoat was applied the other three were then dry-brushed with chain mail over the guns. On two of the three SMG totting chaps I just highlighted their suits dark

grey and dark blue straight over the black undercoat and the third I painted chocolate brown then highlighted this in a lighter brown. The football scarf and hat were painted cream and stripes of red were then added and the flat cap was painted chocolate brown and checks were added in black and khaki. Their shirts were added in coffee highlighted with cream and after their faces and hair was added they just needed a coat of “Quickshade”, bases and matt varnish to complete.

Work has been progressing a pace over on “Blax the Clerics”  blog, see here at…