Posted on October 18, 2014 by rantingsfromunder

Sorry for the late posting this week, this is mainly due to lethargy at the start of the week on my part, I should really have known that as I wanted to do a bit of “greenstuffing” (is this a word?) to these figures I would be stuck waiting for it to dry later in the week putting back my starting to paint them, but anyway for the second faction in my Sci-fi wild west project I thought I could do with some “native Indian” style figures so my thoughts immediately turned to Games Workshops “Kroot” figures as these birdlike aliens have the right style of weaponry and attire I was looking for. Even better Myles has quite the

collection of “Tau” figures but is not keen on their “Kroot” allies. So a bit of begging later and I had five dismembered bodies on my work desk, after cleaning up the various pieces (not as well as I should have it turns out), I glued the legs onto two thin layers of card (to make there bases the same thickness as my other figures) and then stuck these down onto two pence pieces. Next the bases were covered with Tetrion filler and left to dry. Next day the rest of the bodies were added, now I think I might have mentioned before that I hate gluing multi part plastic figures together as I have what “Bender” in “Futurama” would refer to as “Stupid fingers”. Heads and arms would much rather attach themselves to my thumbs than go anywhere near where they are supposed to be attached. Much swearing ensued but eventually the little chaps (not my first choice of word!!) were together.

Now as I needed to add tiny bits of “Greenstuff” to the gaps in their shoulder joints, I’d 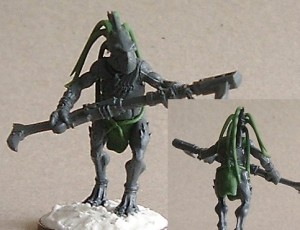 decided to also add loin cloths around their waists, this was done using small rectangles of greenstuff front and back and a thin sausage wrapped around the top as a belt. Next I wanted to make one of the figures a leader of sorts, so after a bit of brain storming (next door came round and complained about the noise of rusty gears turning!) I came up with the idea of adding much longer lengths of “spike” coming out of the back of the head on the leader figure, simple and I think it works (sort of). Next day they were given a coat of matt black and the painting could begin.

Now I’ve painted up some “Kroot” before in a sort of brick orange colour, but I decided

that this time I’d go for a pale green flesh colour so after I’d dry-brushed the weapons in gunmetal I gave the bodies a coat of grass green over which I highlighted them in stone green, the large

“scale” portions on their chests, claws and their beaks were done in khaki, highlighted in coffee and just the beaks and claws edged in cream. All of the clothing (such as it is) was done in chocolate brown highlighted in leather. Their eyes and head spikes were first painted black, and a while dot was added to the eyes and a dry-brush of dark grey was applied to the spikes, a few gold accessories, a coat of Quickshade and “Bobs your uncle” another lot done.

Now if you’ll excuse me I have to get on with next weeks figures I don’t want to be late again do I).