Posted on September 5, 2014 by rantingsfromunder

Right well as I said last week I’ve decided to put the painting on hold for a couple of weeks and have a bit of a start at a new project. This idea came to me while I was looking through 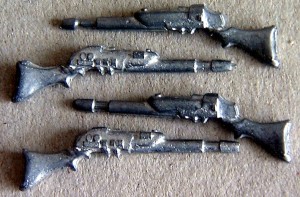 my collection of sci-fi guns in search of some rifles to cut down to add to the 10mm hover tanks a few weeks back, in amongst the various GW and WSD items there were four old rifles that were originally for use with some Imperial Guard “knock offs” that I bought from a company called “Mayhem Miniatures” lord know how long ago. To cut a long story short I didn’t use these rifles but used GW ones instead, however they put me in mind of Sci-fi Winchester’s (don’t ask me why!), and it all sort of grew out of that. Now I’m thinking of using my old faithful of the £2.50 plastic “Gangers” from EM-4 to make the cowboys from (got to buy some more first though) and as I only have four of these rifles I’m going to save them for these, so I needed figures with reasonably compatible weapons for my other factions. “Myles” has some spare “Kroot” figures that I’m thinking will make rather good “Red Indian” type natives (without

much modification!), but to get me started I thought I’d dig out the Orlock figures from the Necromunder box that supplied the Goliath figures that became my superhero “Gamma Boys” a while ago, and these have fairly antiquated looking rifles so these were prime candidates to become my “Mexican Bandito’s”, anyway enough rambling lets get to hacking!!

unnecessary bits such as their rather naff waistcoats and “Greenstuff” them without arms on. Then taking the one with the revolver and knife I decided to thin down his legs a little at the front so I could re-do his trousers with tassels out to the sides, the top of his head was cut off and a sombrero was added, then I added a dangling cloth at the rear to match the one between his legs at the front, I gave him rolled up shirt sleeves, and finally sculpted a waistcoat to replace the skull encrusted item he came with and he was finished.

The next two I never managed to finish, but I’ll describe where I’m up to, the first chap I decided to thin down the bottom of his legs then added flared trouser bottoms, then after thinning down his arms sculpted a new long baggy shirt which is belted at the waist and I added a small pack at the rear of the belt. Then I glued his arm back on, and built up his baggy sleeve over his now skinny arm. I still need top add his other sleeve and some long hair to finish him off. The third one I decided I’d change the pose on so it was back into  the “Necromunda” box to find another of the hand gun figures (they are completely different from the rifle toting ones), after chopping both of his arms off I added the front portion of his “poncho” and

stuck a rifle from one of the other figures on “cross body” into the soft greenstuff (I had cut away the right arm that was moulded onto this piece first, but left both hands that are also moulded on in place) then it was simply a case of running wires of the right length from the shoulders to the back of the hands and building up the sleeves over this. Next I added a handkerchief mask and finally this week another sombrero. He still needs the back of his poncho adding to complete him. I hope get these two and the final two members of my Mexican bandit gang complete by next week, but we’ll see, as its nights again this week, so I really need to break the back of this project by Monday night to have a good chance of getting them done.

Now just before I go I’d like to mention that a friend and fellow “blogger” Blaxcleric, has started a new blog dedicated to the rather fine comic strips he also produces along with the excellent figures he paints, check out his  comic strips at…  http://mooretoons.blogspot.co.uk/  and his painting blog here….  http://fantorical.blogspot.co.uk/