Posted on August 25, 2014 by rantingsfromunder

Impetus! That is my word of the week Impetus! I had a manager in  the post office who used to use it all the time (some times out of context), but it has been sadly lacking around my painting desk this week, so I’ve decided to embark on a new project next week, one that came to me at work the other night (I do a lot of my best thinking on nights), it’s not fully formed yet, but I’m thinking conversions for “space cowboys”, but as usual I’m getting ahead of myself. First thing I had to do was finish off the figures that were turned up by the random painting generator for this week, and they were from Lancelot’s (heads) list and consisted of… 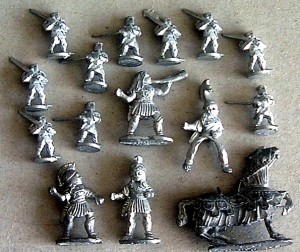 The Amazons I bought a while ago for a fantasy skirmish project we had on the go. I ordered one of each type from the list, painted up all the ones I liked (mostly the topless ones actually), and left these to gather dust. Now the first job was to find a horse for the mounted one as hers appeared to of wandered of at some point. A root about turned up a spare one stamped “Ral Partha 1979”, now thirty five is a good age for a horse but he appeared to be in good health and you’ve got to feel sorry for any figure that’s been waiting that long to be painted so out he went with the rest of them for a coat of matt black.

Painting wise I went for the classic Grecian colours of gold armour over cream tabards.

Their shields are Games Workshop “skink” items sanded flat at the back to fit better and their spears are from Irregular, I ordered loads of shields, spears, axes and swords from them a while back for just such an occasion and they have been really

handy. After they were finished they had a coat of “Quickshade” and the bases were painted in my old colours of “Colour Party” earth brown (18) dry-brushed grass green (19) and “Javis” meadow green flock. Then everything (including the below) was given a spray of matt varnish, and done.

weeks ago so I wont bore you with how I painted them (scroll down a bit if your desperate!), suffice to say that basing them is still a pain!

As I said at the start of this weeks post I’m planning something different next, so we’ll see how that pans out.

Till next time. Cheers Roger.